Silver Flash: Scent of a Wolf 6

Happy Wednesday and Happy Hump Day and Happy Silver Flash Day! This week we have received a prompt from our acquisitions editor, Alison Todd who told us to use: The moment I opened my mouth, I knew I would regret it. I wrote the alternate prompts, which were: Use these three words in your story: sunshine, stereo, ambulance or cold hands, warm heart or In for a penny, in for a pound". For my story, I used both Alison's prompt and my cold hands, warm heart prompt. Be sure to check out all the Silver Flashers, whose links appear at the end of this post!

Scent of a Wolf continues this week, and we learn a little bit more about what has happened to Cameron. Enjoy! 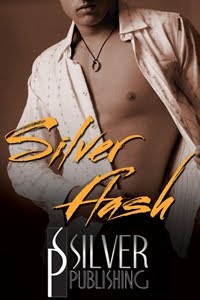 Scent of a Wolf 6

Shaw suspected that it wasn’t a good idea the moment he watched Jareth mount his sleek, black, custom-built motorcycle. The one with the ridiculously obscene price tag. But when money was no object, it was easy to throw it about in ostentatious ways. And Jareth wasn’t the only one guilty of that particular crime.
Talking to his obstinate friend had been futile.  He’d known it the moment he tried to talk him out of going. He’d kept trying up until the point at which Jareth donned his helmet, standing astride the powerful machine, and then took off. Now it was time to go to Plan B. Shaw’s phone was in his hand before Jareth was even out of sight.
“Gavin? It’s me. We may have a slight situation on our hands. Yes, I’ll be right there. For right now, though, can you activate the homing device on Jareth’s bike? Thank you. See you soon.” He slid the phone back into his pocket. That was the most he could do, at least for now. It was imperative that he bring Gavin up to speed, and quickly. If anyone could get to the bottom of this mystery, it was Gavin Hawkins. And hopefully keep Jareth out of serious trouble. That was usually not a problem with the normally staid businessman. But ever since he’d gotten a whiff of the redhead, Jareth had not been himself. Shaw didn’t even want to speculate on what that might mean.
Eyes the color of midnight. Arms that held him close. Strong arms, possessive arms. Holding, supporting, protecting.  Something Cameron had never expected or asked for. But they felt so very right that he could not complain.
“Who are you?” he murmured to the stranger. He received no reply from the dark haired man. Not a word did he speak, their bodies pressed together so tightly in the intimacy of the dance that it was impossible not to feel their mutual desire.
His lips—Cameron couldn’t help but be drawn to them. His own parted in expectation of the kiss, as the other man’s face came closer to his own. Cameron held his breath in anticipation, aching for the touch of those lips. Needing them more than he’d thought it was possible to need or want a kiss.
Almost there now… almost there…
Cameron’s eyes snapped open into a world of semi-darkness.  The man had disappeared; he and his lips both gone. Cameron strained to see into the gloom.  He forced his eyes to focus on the indistinct shapes that loomed before him, tried to make sense out of what he was seeing, but none seemed to exist. He struggled to sit up, fighting the cobwebs which clogged his brain and slowed down his thinking processes. His movements felt very slow and exaggerated, as if he were swimming through molasses.
“The moment I opened my mouth, I knew I would regret it.” A voice spoke from the darkness. A figure emerged, etched in silhouette. A man, judging by the deepness of the voice.  He reached beside him. Cameron heard a
click, and light flooded the room. The brightness stung his eyes; he held up a defensive hand against it.
“Where am I?” Cameron asked. A strange lethargy gripped his limbs. He fought against it, tried to rise, but fell back again.
“And yet I could not help myself,” the voice continued, as though Cameron had never spoken. “The moment I saw you, I knew you for who you were. And when I caught your scent… well, there was nothing more to say.”
Scent?  What did that mean?
Cameron’s eyes began to adjust, focusing on the speaker. Long dark hair and golden skin, and dark eyes. Cold eyes. Cameron wondered if it was his dream man come to life, then realized they looked nothing alike.
“Who the hell are you?”Cameron demanded to know.
The man leaned toward him, eyes glittering ominously in the lamplight. Cameron felt his hands cover his own; he shivered at his touch.
“Cold hands, warm heart,” the man said. His smiled seemed… inappropriate.
Cameron pulled his hands away, but even that simple movement took great effort. “What is this place?” he asked the madman. That’s what he’d decided this man must be—a certifiable, card-carrying escapee from a loony bin—for nothing he said made any sense. Neither did any of the objects that he was seeing in this strange room, as they began to take shape. If he didn’t know better, he’d have thought he’d been kidnapped and taken to a Museum. But that didn’t make any sense.
Kidnapped!
It was coming back to him now. The lunatic, and his keeper, who’d followed him from Marco Polo’s into Stolen Hours, having taken a keen interest in him—in his scent, to be precise. Then the two odd men who’d pursued him for no apparent reason. And now this madman. Who was also interested in his scent.
Had the whole world gone mad?
He really needed to find new places to hang out, Cameron decided. Although he didn’t see himself giving up the cheeseburger buffet. Or Sarah’s company.
“I really gotta go,” he said, sitting straight up. Only then did he realize he’d been reclining on a chaise lounge. A not particularly soft one.  He swung his legs over the side, his feet hitting the floor with a quiet thud. Where had his shoes gone?  And why was he clad only in some sort of a skirt?
“You must not exert yourself, Upuaut, my love. You’ve had a long journey. Rest now.”
Cameron felt himself being pressed back against the firm couch. His muscles would not respond to his command. Even the wolf seemed strangely dormant.
The dark haired man buried his nose in Cameron’s neck, inhaling. “You have returned to me… to your Seeker…” he exulted. “My lover… my wolf…”
What the fuck was Cameron’s last coherent thought before darkness claimed him once more.
Lindsay Klug m/f
Posted by Julie Lynn Hayes at 12:01 AM