Please welcome author Kathleen Ann Gallagher, who is here to tell us about her new release, Love's Encore. Kathleen will be awarding a $25 Amazon/BN GC to one randomly drawn commenter via Rafflecopter. The more you comment, the greater your chances of winning. To find out where the rest of the stops on her tour are, go here. Don't forget to look for the Rafflecopter at the end of this post! 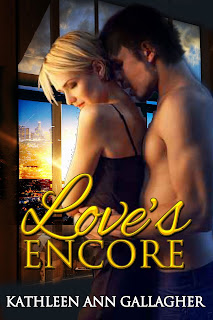 Sadie Layne, a creative and motivated high school drama teacher, is grateful for second chances. After surviving breast cancer, she embarks on a celebratory trip to LA with her two best friends. Sadie never expected to run into the handsome and charming Vince De Carlo in the hotel lobby. She hasn’t seen Vince much since they worked together in a theater company years ago. Their meeting interrupts her plans and reminds her of the life she left behind.

Vince, a struggling actor and cover model, is in LA to promote a television pilot. His old attraction to Sadie is stronger than ever. He never forgot her, even though a trusted friendship and a scripted kiss was all they’d shared.

The reunited pair give in to temptation, but reality soon collides with lust as strong doubts about their blossoming romance get in the way. Sadie dreads facing her defeat as an actress, and Vince doesn’t think a struggling actor like himself is capable of providing the accomplished teacher with what she deserves.

Will the couple find a way to keep their sizzling romance alive and build a future together? Or will their uncertainty win the lead role and smother the flames?

“I’m here for the week.” She wiggled away and stood directly in front of him. She parted her lips and put on a sultry stare. Sadie took hold of his heart.

“You look more stunning than ever tonight.” Vince kept his voice low.

Then, he acted on impulse. He placed his hands on the sides of her face. When she responded with a smile, he couldn’t resist another minute. His heart soared as he gazed down at her. Sadie uttered a soft moan as their lips met. She reached up and placed her arms around his neck, quivered slightly, and nestled up against him, as if she’d wanted him to kiss her all along. His knees weakened as he sampled the sweet peach lip-gloss on her soft, luscious lips.

As he savored each moment, his heart pounded in his ears. If he didn’t break free, he wouldn’t be able to stop himself. He was afraid to open his eyes to find it was all a dream. Vince tried to keep his cool as his breathing sped up like he’d run a marathon. His head spun with thoughts of making love to this amazing woman. Oh, how he wanted to show her how much she meant to him, but he’d wait. One thing he had learned from the way his father had treated his mother was to respect a woman. Sadie deserved so much more. Once their tender moment ended, he stood back, lost in her gaze.

“I’m crazy about you, Sadie. I always have been, but if I’m going too fast, please stop me.” He spoke close to her ear. Vince ran his finger along her cheek and gently lifted her chin. “We met up again this many miles away from Jersey for a reason.” He pushed a strand of her silky, blonde hair away from her beautiful eyes.

“You might have something there,” she agreed. “Don’t worry, I’ll let you know if you get out of line.”

She gave him a seductive stare and devilish smirk, which was out of character for Sadie, but he liked it. She had always been warm and friendly, but not the kind of girl who’d make a first move. Although, she did mention how her cancer scare changed her views on life. Whatever the reason for exposing her sensual side, it was certainly working in his favor. 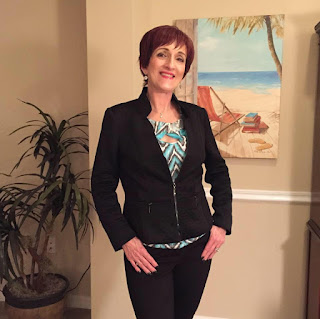 Kathleen writes contemporary and paranormal romance in her home in New Jersey, where she lives with her husband and their two fur babies, Luc and Chaz. She spent years working as a registered nurse in an emergency room. Kathleen discovered her passion for reading and writing in the fourth grade. She has three children and three lovable grandsons. Her favorite romantic getaway is Cape May, New Jersey. You might find Kathleen on a beach down the Jersey Shore, wearing a straw hat and sipping on an iced tea as she plots her next romance novel.

You can find Kathleen at the following places: