I'm excited to announce that the first book in my new Rose and Thorne series with Dreamspinner - Bad Dogs and Drag Queens comes out today! 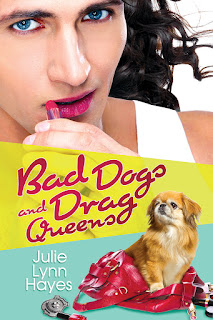 Isn't that a great cover? Paul Richmond did that, and he's so talented! I especially love Vinnie's eyes. And isn't Benny (the Peke) cute?

So I want to tell you something about my guys. Vinnie and Ethan are federal undercover cops, and they're not only partners on the job but off. They've been together almost five years now, and life is great. Having said that, I must warn you, Vinnie can be a diva at times. and he's often down on himself, but he's a great guy and I love him. And he loves Ethan very much! The stories are all told in Vinnie's POV, so be prepared for a lot of sarcasm. But it's all good!

I hope you enjoy the first book and I'd love to hear what you have to say!

Vinnie Delarosa and Ethan Thorne are partners—on and off the clock. Federal undercover detectives, they’re part of a covert task force designed to promote goodwill between the feds and local authorities. They lend an unobtrusive helping hand wherever it’s needed. No credit required.

Vinnie and Ethan work primarily in the Southeast region of the United States and live together in Richmond, Virginia. A mugger problem brings them to Roanoke, where Vinnie is thrown out as bait to catch the man who’s been snatching purses in a city park, but they end up with more than they bargained for. Why is Vinnie always the one who has to wear the dress? Ethan says it’s because Vinnie looks much prettier in a skirt. How can he argue with that?

Expecting to return to Richmond afterward, Vinnie and Ethan find themselves assigned a new case instead. They are to go undercover at The Stroll, one of the biggest gay nightclubs in Roanoke. Someone is terrorizing both the customers and the performers. Could they be dealing with a hate crime? Someone has to protect the drag queens of Roanoke, so it’s Vinnie and Ethan to the rescue!

The author is donating 10% of the royalties from this book to No Kid Hungry. Visit nokidhungry.org for more information about this organization.

Excerpt:
“Remind me again whose stupid idea this lipstick was,” I huffed beneath my breath. Without thinking, I licked my lips. They felt greasy, and tasted even worse. I forced myself not to grimace, afraid it might crack the foundation I’d slathered on my face.
“Mine, you sexy beast,” came the smart-ass reply in my ear. “I think you got purty lips, mmhmmm.”
“Fuck you,” I growled. “You should be doing this, not me, and you know it. I did it last time.”
And the time before that. And the time before that. Wait, did I detect a pattern here?
“What I know is you look better in a skirt than I do. And you look damn good out of it, too.”
My cheeks suffused with heat at Ethan’s words. Luckily the darkness hid a multitude of sins, my embarrassment being the least of them. Hopefully, no one else was listening—I knew I’d never hear the end of it. Just what I needed—to be the object of ridicule of the Roanoke PD.
I pulled a compact from the purple paisley cloth purse slung over my shoulder and flipped open the mirror so I could assess my surroundings. I couldn’t see a damn thing. I growled again. I’d have to move closer to the half-assed excuse for a light this park possessed if I wanted to scope out the situation. The city fathers had been too cheap to install proper lighting, which is why they had this mugging problem to begin with.
“What’s wrong, Vinnie?” Ethan’s concern came through my earpiece loud and clear. He might aggravate me some of the time—or most of the time—but he always had my back.
“Nothing,” I muttered as I wobbled toward the light. These heels were ridiculous. How did women do it? I’d just gained an all-new respect for the fairer sex. They made it seem so effortless, while I possessed all of the grace of a wounded water buffalo. I’d tried opting for flats, but Ethan had nixed the idea. Said they wouldn’t go with the skirt. Plus he said the heels made my legs look longer.
Pervert.