Is the Blacklist Heading to Hell in a Handbasket?

Ever since it began, I've loved the Blacklist. From the first scene where Raymond "Red" Reddington, played brilliantly by James Spader, fell to his knees and surrendered, I have watched it devotedly. But this past season makes me wonder what the hell is going on?  *****SPOILERS GALORE*** 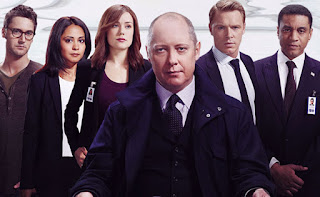 The relationship between Reddington and Lizzie is the crux of the series. Finding the criminals on the Blacklist, while entertaining, is secondary to discovering why Raymond is so focused on her. Naturally, speculation runs high that he is her father, widely held belief that has been denied by Red, but widely assumed to be a lie.

Personally, I didn't care for the whole Lizzie is a Russian spy arc, which spawned the Don Ressler becomes super-Asshole and annoyingly rigid. He needs to remove that big stick he's got shoved up his ass. His behavior toward Samar, and indirectly toward Aram, was arrogant and unforgivable. His relentless, tunnel-vision tracking of Lizzie was unjustifiable, despite his protests that he was "just doing his job". The only way this is in character is if Kessler is an asshole, which I now believe he is. 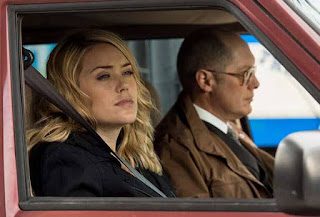 Trying to clear Lizzie's name became a national pastime, with capturing Lizzie being the flip side of that coin. Of course the Cabal wanted to silence her. She'd outed them to the public, and this was their way of doing damage control. But, and now we come to the next reason why I hated this so much, we have the re-introduction of Tom into the picture. He manipulated and used Lizzie from the get-go. But now he realizes he loves her, wants to be a part of her life, and shelter her? Give me a fucking break! 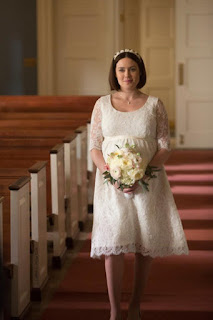 I do not believe for one minute that man has changed his spots. I do understand that people can change, but in order to go from bad to good, the good needs to be there from the beginning, and I don't see that with Tom.


Now I understand that the pregnancy had to be written into the script because of Megan Boone actually being pregnant. But the rest of it? It seemed that the further along in her pregnancy Lizzie was, the stupider she got. I don't think you can even blame hormones for that. She got sappily stupid over Tom. Did those hormones make her forget everything he'd ever done to her? Every lie? The fact he wasn't who he pretended to be?

Side note: Since that isn't his real name, is their marriage even legal?

Her behavior toward Raymond continued to infuriate me, irrational and illogical as her growing dependency on Tom. This all came to a head after the aborted wedding when she was wounded and gave birth prematurely. She said some damn hurtful things to a man who's done nothing but try to protect her ever since he came into her life. Her death was a shocker, of course, but given what had been happening throughout the season, I decided I could live with it and continue to watch The Blacklist for Raymond. He's the reason I watch, not her. And frankly, I don't think much of Megan Boone as an actress. I think there are lots better actresses to play that role. But we were stuck with her, so I went with it. Her death seemed our ticket out. 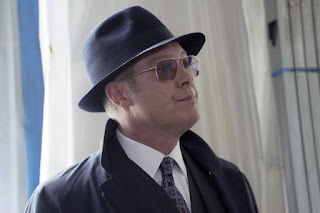 While Tom supposedly goes about the task of raising his infant daughter on his own, there are wheels at work behind the scene. Raymond learns that the man who ordered the death of Elizabeth is Alexander Kirk, so of course he sets his sights on him. At first Tom refuses to allow Red access to the infant Agnes, but gradually relents and allows Red to keep them both safe. At least on the surface, that is the case. In reality, he has other fish to fry, and slips away from Red's watch dogs, putting himself and Agnes on a plane... to Cuba?  What the hell?

Suddenly, in the last episode, I had a horrible foreboding, which turned out to be true... Lizzie is not dead, but alive and well in Cuba, and Tom has inadvertently led her stalker to her.

Now for the kickers.

How did this all happen? In the worst possible way: Raymond was betrayed by someone close to him. Someone who had the gall to think he was wrong and she was right and the ends justified the means. Someone he'd trusted for many years. 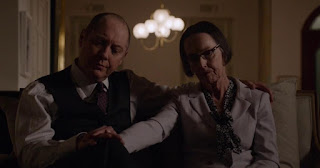 Yes, it was Kaplan. She orchestrated the fake death of Lizzie, along with the less-than-eager-to-comply doctor, and helped Tom to elude them as well. But has she simply led them into another trap?

And now for the pièce de résistance. In the final scene of the last episode of the season, as Lizzie sits tied up in a chair, she is faced by Alexander Kirk, the man who has unrelentingly hunted her down and captured her.... and informed that he is her father.

If this is indeed the case, and not further misdirection or an outright lie, then there are still questions to be answered. Primarily those regarding Raymond's motivation throughout the entire series. Was it all a lie, this whole thing? If so, you got some 'splaining to do! 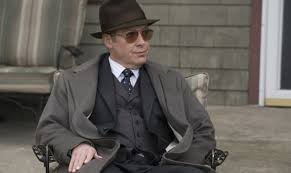 Personally, I find this to be a clusterfuck of monomental proportions. I think most of us were convinced that Red is Lizzie's father. What other relationship could compel such devotion? And there is no doubt he is devoted to her. Even his love for Lizzie's mother doesn't explain that.

I am seriously dismayed at this turn of events, and fearful of the coming season. I can only pray that the writers redeem themselves and put things right. Get the story back on track. Capture the Blacklisters. Get Tom out of the damn picture. I foresee that next season could be the last unless something changes.

I would be sad to see it end, but there is always DVD. And I'm sure James Spader will land on his feet, in another role. He's too good not to. 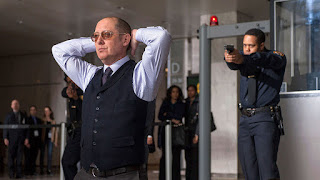 Posted by Julie Lynn Hayes at 9:43 AM