Please welcome author Bernadette Marie, who is here to tell us about her new release, Wanderlust. Bernadette will be awarding a $20 Amazon/BN GC to one randomly drawn commenter via Rafflecopter. The more you comment, the better your chances of winning. To find a list of the other stops on her tour, go here. Don't forget to look for the Rafflecopter at the end of this post! 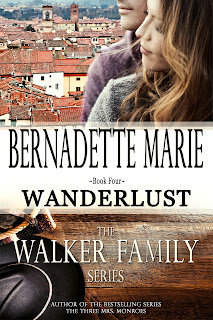 Gia Gallow has traveled the world. Her wanderlust landed her in Georgia where she has created a life for herself away from the petty differences of relatives and domineering ex-lovers. Having settled in America, she has a successful business and dear friends—and the attention of both Dane and Russell Walker. Due to her own family's dramas over dueling hearts, she might have to forget about her feelings for Dane to keep peace within the Walker family, but sometimes even running thousands of miles away can't keep a heart from going after what the heart wants. And Gia's heart wants Dane.

Dane awoke in his childhood bedroom with a start. As he sat there, a bead of sweat rolling
down his forehead, he realized it wasn't that he'd heard anything to wake him—in fact, it had been too quiet.

The sun was up and warm as it filtered through the window and onto his skin.

He wiped his brow with the back of his hand and then tucked it under his head. He closed his
eyes and thought about the room.

They'd done things such as walk down to the river and fish by a full moon. There had been an
enormous tree outside the window and during a storm it could be menacing and scary. But on a
warm summer night, it was a refuge as the big branch came right to their window like a bridge to the outdoors.

There had always been two beds in the room. Sometimes they'd be pushed together for comfort, especially when that tree outside swayed in the wind. They'd also been the walls to some of the greatest forts ever built with blankets and sheets.

Long talks were had in that room. Some of those talks went well into early morning. They'd
debated over Santa Claus and the Tooth Fairy. There were some very serious discussions over Super Bowl XXXIII. Atlanta's new team had gone to the big game under the coaching of Dan Reeves, and they had to play his old team, the Denver Broncos. It seemed unfair to Gerald, but Dane thought it was just. He'd been a fan of John Elway his whole life. If he thought back hard enough, he was fairly sure that when he'd taunted Gerald with Elway's win, he'd gotten a black eye. The thought of it had him chuckling to himself in the quiet.

Talks about football and fishing soon gave to girls and talks about birds and bees. He was grateful that walls couldn't actually talk.

No longer were there posters and drawings on the walls. His mother had redesigned the room,
he knew, for future grandchildren. The room was clean of everything but a dresser and a rocking chair. The closet door, another menacing nightmare maker, was cracked open as the door was too warped to stay closed.

Some poor grandchild would be as afraid of the abyss of the closet as he and Gerald had been.

It wasn't long before the sound of the cattle caught his attention. He'd have to admit it was a
much better sound than early morning traffic. Then he heard the roaring of the first pickup truck engine. Surely he'd actually slept through the first. The sun was up after all, and he knew his father and brothers were up before the sun.

Dane rolled to his side and pulled the blanket up to his ear. This was why it was good to be
visiting. No one had awakened him and made him help out with the early morning chores. Suckers! 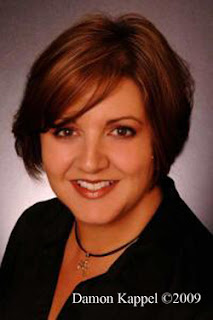 Bernadette Marie has been an avid writer since the early age of 13, when she’d fill notebook after notebook with stories that she’d share with her friends. Her journey into novel writing started the summer before eighth grade when her father gave her an old typewriter. At all times of the day and night you would find her on the back porch penning her first work, which she would continue to write for the next 22 years.

In 2007 – after marriage, filling her chronic entrepreneurial needs, and having five children –
Bernadette began to write seriously with the goal of being published. That year she wrote 12
books. In 2009 she was contracted for her first trilogy and the published author was born. In
2011 she (being the entrepreneur that she is) opened her own publishing house, 5 Prince
Publishing, and has released contemporary titles and has begun the process of taking on other authors in other genres.

Bernadette spends most of her free time driving her kids to their many events. She is also an accomplished martial artist, working her way to her second degree black belt in Tang Soo Do.  An avid reader she loves to meet readers who enjoy reading contemporary romances and she always promises Happily Ever After.

Enter to win a $20 Amazon GC - a Rafflecopter giveaway
Posted by Julie Lynn Hayes at 12:01 AM