Please welcome author Jennifer-Crystal Johnson, who is here to tell us about her new release, Fibers. Jennifer will be awarding a $10 Amazon/BN GC to one randomly drawn commenter via Rafflecopter. The more you comment, the better your chances of winning. To find out where the other stops on her tour are, go here. Don't forget to look for the Rafflecopter at the end of this post.

First, I’d like to say thank you so much for having me do an interview on your blog! I appreciate your time, work, and willingness to share my thoughts and new book information with your readers =).
The Questions

1) You’re marooned on a small island with one person and one item of your choice—who is that person and what item do you have?
There’s absolutely no way I could pick just one person.... I have three kids, an amazing family, and incredible friends! Although if I could move all of my nearest and dearest to an island with me to stay close, I totally would! ;)
The item is an easier answer... a laptop with internet access. If there’s no internet and no electricity, I’d like to have a really big journal (lots of pages to fill) and some pens. As long as I have my mind and a way to express my thoughts, I’ll be able to maintain my sanity ;).

2) Which musical would you say best exemplifies your life – and which character in that musical are you?
Hmmm, well I’m not too familiar with musicals in general, but one of my favorites is Across the Universe. As far as a musical that exemplifies my life... well, if you know of any where the main character is an Army brat from Germany, has witnessed shootings, driven across the country several times, survived domestic violence, and been on TV, the radio, and in the newspaper all by the age of 16, then please let me know! ;)

3) Take these three words and give me a 100 word or less scene using them: hammer, saucer, traffic lights.
The traffic lights conspired against me. However, hitting every red light on my way to an appointment became less mundane when I saw a man wielding a hammer chasing a woman across the street. She clutched a teacup and saucer as she ran, and just as he gained on her, she threw the saucer Frisbee-style at her pursuer and it shattered, forcing him to drop the hammer. Two police cars pulled up just then, lights flashing and sirens commanding the couple to stop with short blips and choppy noises. As with most DV calls, no one pressed charges.

4) You’ve just been let loose in the world of fiction, with permission to do anyone you want. Who do you fuck first and why?
Hahaha! Oh wow, what a question. Considering the trauma I experienced in the past surrounding sex (spousal rape & domestic violence) and the fact that I’ve been practically abstinent for almost a year and a half now, I don’t think I’d want to mess myself up emotionally for anyone, fictional or literary genius or otherwise lol. Thanks for the offer though! Lmao

5) What is your idea of how to spend romantic time with your significant other?
I’m kind of old-school, so a nice dinner is awesome. I’m also a homebody, so I’d much rather spend time cuddling and talking or watching a good movie/TV show than be out and about too much.
I have been single for going on four years now (by choice... I’m extremely picky and require a solid friendship as a foundation, which most men take as being “friend-zoned,” so they give up; so far, people just tend to want to fuck or hook up, which means they’re useless to me long-term and I sure as hell can’t expect them to put in the time, effort, or caring to get to know my mind and soul in the long run), and am essentially biding my time until I meet someone who’s in it for more... and for ME, the real me, not just out of loneliness or horniness. Desperation is so not sexy.
Ideally, I’d like to be able to brainstorm with him, work on books, music, and business stuff together, bounce ideas off of each other, cook together, care for our home and family together, and it would be extremely helpful if he had the everyday communication and problem-solving skills it takes to be with someone long-term. It isn’t difficult to keep me happy and I say something when there’s an issue that needs to be addressed... the last man I was with couldn’t handle that at all, even though I was kind in bringing things up, and he would burst into tears and sob about how he’s sorry he failed me... and nothing would change. Do that a few times a month and any independent woman would get frustrated. I’m amazed at how patient I actually was with him.
I’m a single mother of three, strong, independent, and don’t need to feel like I’m raising a fourth child, as overgrown as that child may be lol ;). It’s about partnership. I feel loved when I don’t have to be the sole provider for everything (money, cooking, cleaning, kids’ problems, fixing vehicles/appliances, and all the other stuff life throws our way as humans). Yes, I fix my own appliances and know how to do the basics on my car. It makes me kinda sad when a man doesn’t have a clue about that stuff.

6) When you start a new story, do you begin with a character or a plot?
I’m very much drawn to plot, although if I had an idea for a specific type of character, I would run with that, too. However, most of my story ideas are plot-based, usually having to do with alternate dimensions, the spiritual world, or cryptozoology. Creatures are awesome ;).

7) If they were to make the story of your life into a movie, who should play you?
According to Playbuzz, it should be Kate Winslet ;). Honestly, though, when it comes to casting, I’m not a professional and I’m certain that there are way too many actors and actresses out there for me to keep track of. In any sort of movie situation, I’d love to sit back, watch, learn the process from start to finish, and give my creative input when I find it necessary (or they ask). I wear many hats in my daily life, but casting specialist is not one of them! Lol

8) Who’s your favorite horror villain and why?
There’s nothing quite as scary as a creepy little girl, so I’m going to have to go with Samara from The Ring. I loved the twist that she didn’t need help... she wanted to be freed, and through their best intentions, the main characters in fact released a monster. In creepy little girl form. Yikes!

9) Do you have an historical crush and if so, who is it?
I don’t, actually.... Confession: I’m really, really weird when it comes to questions about crushes, heroes, etc. I’ve never idolized anyone, and while my friends in high school were swooning over Leo DiCaprio, I harbored a secret crush for Liam Neeson, despite him being 32 years my senior.

10) Is there a story that you’d like to tell but you think the world isn’t ready to receive it?
Oh, yes. It will have to stay on the back burner for a while, but I had the idea and will probably cause controversy with it; however, I think that it’s something to seriously think about and consider. I look at big picture scenarios... humanity as a whole, the planet as a whole, social psychology, mob mentality, things like that. They fascinate me... so, when the time comes, after the Infiltration Trilogy and a second series I have planned, I will write about this controversial topic and hopefully help people to think about humanity as a whole as opposed to everyone just thinking about their own little world individually =).
Thank you so much again for interviewing me on your blog! I especially liked the 100-words-or-less exercise; what a great concept! I hope you’re all having a wonderful week and check out my novel, Fibers, on Amazon =). 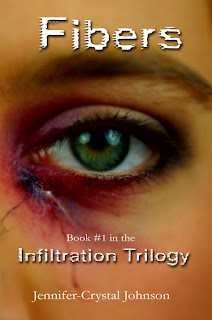 Anna Reynolds is caught up in the middle of a secret interdimensional government agreement... and she doesn't even know it.

There's a medical anomaly loosely dubbed Morgellons disease afflicting a number of people. Symptoms include open sores that produce colorful string-like fibers, fatigue, and nightmarish visions of shadowy figures. No one knows where it came from. No one knows what causes it. There is no cure.

When Anna begins having nightmares and waking hallucinations of the shadow people, her uneasiness about her condition grows. Enlisting the help of her doctor and some friends, Anna is determined to find out what's really going on and why Morgellons is such a mystery.

With her health declining and doubts about whom she can trust, is Anna doomed to become a slave to her condition? Or will she and her unlikely group of would-be heroes come through, saving her... and, ultimately, the world?

The twinkling sound of the wind chimes gave an eerie undertone to the night, the wind blowing through the trees and the darkness seeming more intense than usual. Anna wrapped her coat tightly around herself, walking briskly back toward home. She usually didn’t walk anywhere, especially at night, but she’d decided to get some fresh air and needed time to think. Walking was always good for that, even if it was a little cold and getting dark so much earlier.

Reaching into her pocket for her keys, she approached the front door. The porch light was out – she must’ve forgotten to turn it on before she left. Trying to work through feeling alone and fending off paranoia, she rummaged in her purse for her keys and retrieved them just as her foot hit something on her front porch. Of course she couldn’t see, but it sounded and felt like a box of some kind.

She pulled her cell phone out of her purse and turned on the flashlight app to see what was happening. Shining the light on her porch, she saw that it was, indeed, a box. A mystery box, she thought. As if my life couldn’t get any stranger.

She unlocked the front door and flipped the light switch, but nothing happened. Trying to juggle her phone and the box at the same time, she walked into the house, set the box down, and went into the living room to try the light there. Also nothing. Shaking her head and doing her best to quiet her thoughts, she made her way into the garage with her phone and found the breaker box. She flipped the switch and the lights came on without a problem.

Things are getting entirely too weird around here, she thought, cautiously making her way back upstairs to her entry where the box sat. She switched off her flashlight app and stood still for a few moments, listening to see if she could hear anything to indicate that someone was in the house. She didn’t think so because her door had been locked, but she was so scared she could hear her heartbeat pounding in her ears. Everything else was silent.

Satisfied that no one was in her house, she picked up the box and took it into her kitchen. She set it on the counter and inspected it. There was a note taped to the top of it. She unfolded it and read aloud, “Trust no one.” 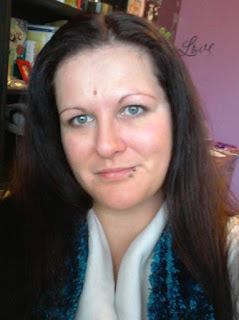