Please welcome author Nesly Clerge, who is here to talk about his new release, When the Serpent Bites. He will be awarding a signed paperback copy of When the Serpent Bites to one randomly drawn commenter via Rafflecopter. The more you comment, the better your chances of winning. To find out where the rest of the stops on his tour are, go here. Don't forget to look for the Rafflecopter at the end of this post.

When the Serpent Bites
by Nesly Clerge 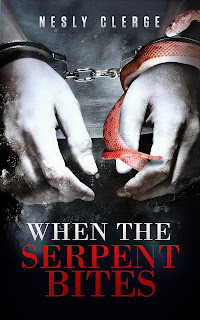 Frederick Starks has it all—a gorgeous wife who was his high school sweetheart, three beautiful children, a mansion and cars others envy, millions in the bank, respected in his community, admired by his employees, loved and respected by loyal friends. He revels in the hard-earned power and control he’s acquired. As the saying goes, “All that glitters is not gold,” which Starks discovers when gut-wrenching betrayal by his wife sends him over the edge and into a maximum security prison. There, Starks is a new “fish,” stripped of nearly everything he’s always relied on. In that place, where inmates and guards have their own rules and codes of conduct, Starks is forced to face the darker side of life, and his own darker side, especially when the betrayals, both inside and outside the prison, don’t stop. He must choose which path to follow when the line between right and wrong becomes blurred: one that leads to getting out of the physical and emotional hellhole he finds himself in or one that keeps him alive.

Starks tugged at the neckline of the undershirt his mother had dropped off for him at the jail. She hadn’t wanted to see him. He knew why: Members of the maternal side of his family were born with a pride chromosome. Lynn Starks loved her son but the extreme public humiliation resulting from his arrest was more than she could stand. He knew she’d forgive him one day, and that her ability to forgive tended to simmer until she was ready.

“All rise. The District Court of Suffolk County, State of Massachusetts, is now in session. Honorable Judge Harold Weaver, presiding.”

The judge took his seat at the bench then shuffled through the case files in front of him, glancing up briefly at the line-up of people waiting to plead. “We’ll begin with arraignments then move onto trials.” In a monotone voice, he continued. “All persons are innocent until proven guilty. You have the option to plead not guilty, guilty, or no contest. No contest means you concede the charge or charges against you, without admitting guilt and without presenting a defense. I advise you against pleading no contest. You have the right to obtain counsel. If you cannot afford counsel, the court will appoint an attorney for you.”

An hour later, it was Starks’s turn in front of the judge. He flinched and his face reddened when the charges against him were read aloud. He also questioned whether his decision to plead not guilty would work in his favor or not. He’d always been able to methodically weigh pros and cons when it came to business matters. This, however, was unfamiliar, unpredictable territory.

He tried to give his full attention to what was going on but his mind wanted him in the past, a reverie that was broken when Parker nudged him to stand.

“My client pleads not guilty to all charges, your honor.”

The judge looked directly at Starks then glanced at Parker with a quizzical expression on his face. He shook his head, checked the calendar and said, “Trial starts this coming Monday, 10:00 a.m.”

“In the matter of bail, your honor—”

“Your honor, in this instance, bail can be set quite high, which will ensure my client shows up for trial.”

“Denied.” The judge’s gavel came down, putting an end to the matter.

Starks turned to Parker. “I don’t want to stay in jail until the trial. Do something. Get me out, for Christ’s sake.”

Parker began to pack his briefcase. “This judge is a hard-ass. Plus, it’s election time. You’ve seen the corporate scandals on the front pages of all the newspapers. Everyone, especially candidates running for office, are screaming for corporate criminals to be held accountable.”

“I’m not involved in any of that.”

“No.” Parker shut his briefcase. “But you’re considered one of them.”

“Am I going to have to keep paying for the shit others do?”

Nesly Clerge received his bachelor’s degree in physiology and neurobiology at the University of Maryland, and later pursued a doctoral degree in the field of chiropractic medicine. Although his background is primarily science-based, he has finally embraced his lifelong passion for writing. Clerge’s debut novel, When the Serpent Bites, will be available in 2015, with the sequel to follow in 2016. His debut novel explores choices, consequences, and the complexities of human emotions, especially when we are placed in a less-than-desirable setting. When he is not writing, Clerge manages several multidisciplinary clinics. He enjoys reading, chess, traveling, exploring the outdoors, and spending time with his significant other and his sons.