Today please welcome author Emily Kimelman. Full Moon Dreaming is one of the stops on her virtual book tour, and she's going to tell us about her newest release, Insatiable. Emily is offering a prize to a random commenter - a hand blown pint glass that her husband (a third-generation glassblower) made for the launch of her first novel, Unleashed. The more you follow the tour and comment, the better your chances of winning. To find other stops on the tour, go here 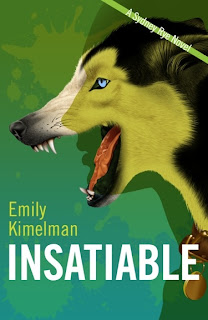 INSATIABLE is the third novel in my Sydney Rye Series of dark murder mysteries. This series feature a strong female protagonist and her canine best friend. It is recommended for the 18+ who enjoy some violence, don't mind dirty language, and are up for a dash of sex. Not to mention an awesome, rollicking good mystery!

INSATIABLE begins with private detective Sydney Rye living a simple, disciplined life in London, but when a dangerous man from her past calls, Rye finds she cannot turn him away. Robert Maxim explains that the daughter of a powerful friend has gone missing and he wants Rye to find her. In exchange he offers her something she had given up hope of ever having; freedom from her past.

With her dog, Blue, at her side, Rye meets up with her new partner, a handsome man she's not sure she can trust. Heading for Mexico City, they go undercover, posing as husband and wife. After meeting with the bereaved parents, Rye starts to sense that there is more going on than just a missing girl. But it isn't until they arrive in the Yucatan Peninsula, hot on the girl's trail in Paradise, that all hell breaks loose. Sydney has to reach out for help from old friends and deal with the consequences of her past, if she's going to find the girl and keep them all alive.

Around the next bend a chicken was in the road. Jimmy saw it and swerved into a rut to avoid it. It was a wild, out-of-control move and I grabbed at the door trying to steady myself. The Jeep jerked down and then up again as Jimmy powered us out of the ditch and back onto the road. "What the fuck!" I yelled.

"There was a chicken."

"Next time fucking hit the chicken!"

That's exactly what the guy in the black Jeep did. I turned around to see the feathers exploding with a mix of blood and guts against the guy's grill. He drove through the chicken into the shade of a tree and I saw him. I saw Blane. He was wearing wrap-around sunglasses - the kind douche bags think look cool. His mouth was a straight line, his face made of stone.

I rested my new gun on the shoulder of my seat and tried to steady my aim as we raced back past the Home Depot. Jimmy swerved around other cars, at times facing oncoming traffic, to further our escape. It was impossible to get a clear shot. I turned back around as we crested a hill and we could see the town below us.

Traffic became congested as we got closer to town. I turned around and saw that Blane was stuck several cars behind us. There was no way he could fire off any rounds with all these people around. We stopped at a red light and I waved to Blane. He raised a gun and I dropped down in my seat as I heard a window shatter. It wasn't our car but the one right behind us. 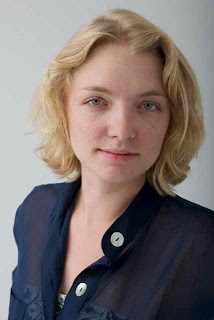 Emily Kimelman lives on a boat in the Hudson Valley with her husband, Sean and their dog Kinsey (named after Sue Grafton's Kinsey Millhone). Kimelman has a passion for traveling and spends as much time as possible in the pursuit of adventure.

Her Sydney Rye series feature a strong female protagonist and her canine best friend. It is recommended for the 18+ who enjoy some violence, don't mind dirty language, and are up for a dash of sex. Not to mention an awesome, rollicking good mystery! 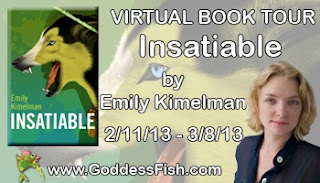 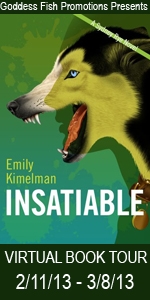