It's been a while since I talked about what I'm watching, and I've begun to watch some great new shows, so let's get to it!

First, anyone who knows me knows I love serial killers - Hannibal Lecter, Dexter Morgan, Sweeney Todd, Gretchen Lowell... I find them all fascinating. In fact, I've created my own serial killer recently and plan to expand on that short flash that I did, There is a new show on Fox that involves a serial killer, so of course I had to check it out. it didn't hurt that Kevin Bacon and James Purefoy are the main characters. 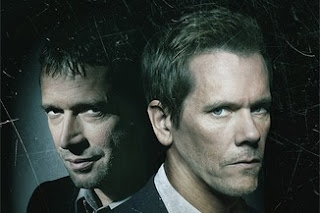 The Following airs on Fox on Monday nights. James Purefoy is Joe Carroll, the incarcerated serial killer, an English professor with a penchant for Edgar Allan Poe and for killing. He is a very charismatic man, and he has a number of followers whom he has trained to obey his every command, and whom he controls even inside prison. You may remember James Purefoy as Marc Antony in the wonderful series Rome. Kevin Bacon is Ryan Hardy is the FBI agent that brought Joe down - and also had an affair with Mrs. Carroll (played by Natalie Zea, who certainly gets around this year. She's also Raylan Givens' ex Winona in Justified and the crazy lady who tried to kill Hank Moody (David Duchovny) in Californication.

There has been a fantastic storyline going on that involves Joe's young son, Joey, his nanny, and the gay next door neighbors, who kidnap the young boy and all efforts are directed toward finding and rescuing him. This is a really good show, I'm enjoying the heck out of it, and look forward to seeing more of it. Why can't you write Vampire Diaries like this, Kevin Williamson? Maybe it wouldn't suck so much if you did. Just sayin'. 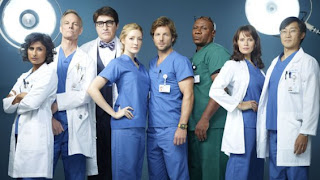 Also on Monday nights is a program I started watching on TNT, believe it or not, an original series called Monday Mornings, involving the morbidity and mortality meetings at Chelsea General, starring Ving Rhames and Alfred Molina. Molina is chief of surgery, Rhames chief of trauma. There's an obnoxious transplant surgeon, an overachieving female doctor, a Korean surgeon with a minimal command of English, a brain surgeon who is cheating on her husband with another member of the staff, and more. I'm really enjoying this show a lot so far. My favorite character is Dr. Sung, who cut to the chase when talking to a patient and his family regarding the proposed surgery: "No do, dead."  I hope my liking this show doesn't doom it to failure. 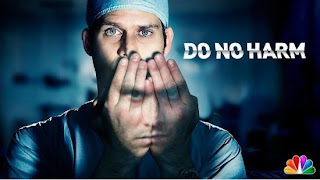 I would tell you about Do No Harm, which involved a Jekyll/Hyde doctor, and his struggle to keep his evil alter ego in check, but alas, they cancelled it after two episodes, to my great chagrin. I'm pissed at NBC for that, coming on the heels of their cancellation of Awake. You disappoint me greatly, NBC. 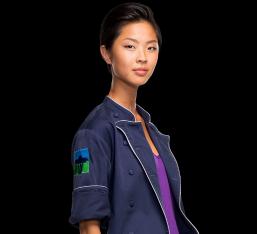 Last night saw the finale of Top Chef Seattle, and what a season it was!  ****SPOILERS***** As you may recall, I was bitterly disappointed to see my favorite chef voted off far too early, Kristen, especially when obnoxious chefs were still there, like Josie. (At least Carla was already gone). I was disappointed when Stefan was cut too. But I held on to the hope that Kristen would re-emerge through the auspices of the Last Chance Kitchen, and she did, becoming the third chef, along with Brooke and Sheldon. I was hoping Sheldon would be eliminated and the two women would face off, and that's just how it went. Kristen and Brooke went on to LA for the finale, which was done before a live audience, and they had former team members as sous chefs. I was surprised that Kristen didn't use her "husband" Stefan. Each chef planned five courses. As each course was judged, the judge would pick their favorite between the two, and the first chef to gain three votes in a round was the winner of that round. First chef to win three rounds would win Top Chef. Kristen won the first round, Brooke the second, but then Kristen took the next two and became Top Chef.  Yay! Wonder what they'll do  next, now that this is done? 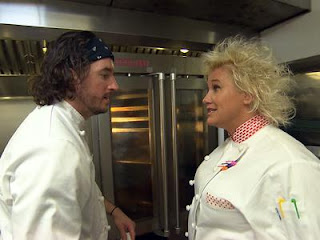 Sweet Genius ended its seasons, alas, and in its place we have been given Chef Wanted, with Anne Burrell. There was a similar show that didn't last long, Chef Hunter. I have to say that although I like Anne, this show leaves me, not cold, but not exactly excited to watch it either. If I have to record it rather than watch it when it airs, no big deal. It's interesting viewing, but adding Anne to the equation didn't make it better in my book, and it's fairly predictable. Four chefs begin, competing for a spot at a restaurant that is desperate for a new head chef and has turned to Anne for help. Two are eliminated in the first two challenges, and the remaining two each take charge of the restaurant for a night, plan their menus, and do a full dinner service. There is invariably at least one contestant that you look at and wonder why they are even there, they're so obviously mismatched. Then, when it comes to the dinner service, all the auditioning chefs have problems and have to over come them. Then the owner/owners make their selection and all's well (and amazingly they already have the right size chef coat waiting for the new head chef!) Not a bad show, but nothing I'd cry over if it was cancelled. 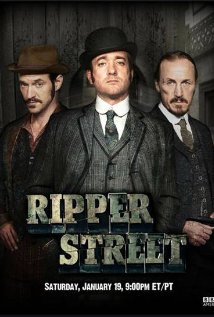 On a brighter note, I've begun watching Ripper Street on BBC America, and I am enjoying that very much! Saturday nights is when it airs.****SPOILERS AHEAD*** Matthew MacFadyen is Inspector Reid, who's charged with protecting the folks in the Whitechapel area. Yes, that Whitechapel. And no, this isn't about the Ripper, although he does rate mention now and then, mostly as the one that got away. Inspector Reid is married, but tragedy has marred the union through the death of their only child, a daughter, and his wife has pulled away from him, seeking the solace of the church and her work at the mission. This is becoming more and more of an issue, especially as Reid finds himself unexpectedly attracted to a Jewish woman who heads a local orphanage. At Reid's side is Sergeant Drake, who has a thing for a lady of easy virtue in a prominent house of ill repute, but he doesn't want her like that, and she has a living to make, so they have a difficult relationship at best. Then there is Homer Jackson, an American who was once a Pinkerton, and now lives in that same whorehouse, with the madame, and is a very skillful if unorthodox surgeon. I highly recommend this series. I look forward to it every week.

Well, all for now, better get back to writing and stuff. I have another series I want to talk about, but I want to devote more time to it - BBC's Sherlock. Let's just say for now that I am totally in love and intend to buy the first two seasons as soon as I can afford it.

Posted by Julie Lynn Hayes at 9:34 AM