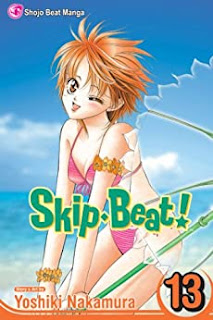 It’s a sink-or-swim moment for Ren! He has to convince both the President of LME as well as the director of the film that he can play Katsuki not only well but better than his predecessor. Mostly he has to convince Lory, who knows him too well to think he can accomplish this. Ren requests to ad lib a scene, expressing his confidence that his co-star Itsumi will not only be able to do so, he will make her react the way he wants her to. The scene begins…where will it end? Most importantly, will Lory approve?

Afterward, Kyoko is amazed that Lory has figured out that Ren is in love with a girl…although she is clueless to the fact that the girl is her! Mr Yoshiro suspects the truth, and tries to give Kyoko a clue, but the poor girl remains oblivious to his hints. When Kyoko offers Ren the precious stone she once received from Corn (whom she believes to have been a fairy but was actually Ren), what will he do?

Most of this volume is taken up with Ren’s test, but it’s well worth the price of admission to watch him in action, drawing on newly discovered although unadmitted feelings for Kyoko. Between the two of them, they don’t have a clue! Guess we have to wait to find out which one catches on first!