Interview with Roy Landry (The Sheriff) 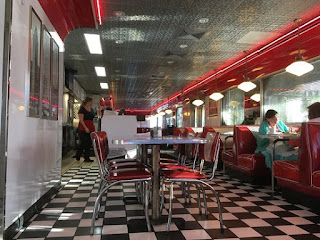 I haven’t done any interviews lately, especially those that require travel, but today I’m going to the small town of Burnham, Texas to talk to the sheriff there. No, not because of any trouble or anything, but because his book just came out, and I thought people should meet him.

Roy Landry is the Sheriff of Burnham. He’s agreed to meet me at Milly’s Diner. Why am I not surprised? Neither am I surprised to see he’s not alone. But that’s okay too. I like these other guys too. I know them all. By others, I mean Lee, Marshall, and Dustin.

I walk into the diner and make a beeline for their table. All four men stand as I approach, and Lee pulls out a chair for me. Milly comes to the table and greets me with a big smile. “Coffee all around?” she asks and everyone readily agrees. She returns quickly with a pot of hot java and assorted creamers and tells us she’ll come back when we’re ready to order.

“Good morning, guys,” I greet them. “How did I know you would all be here?”

Lee clears his throat and Marshall snickers. “I told Roy you wanted to talk to him, but he insisted.”

I give Roy a knowing glance, even as Dustin says, “Told you so.” Roy turns red and everyone laughs.

“Oh hush you,” he tells Dustin, which produces more laughter.

“I’m happy to see all of you,” I insist. “It’s not often I get to talk to such handsome gentlemen.”

Now Marshall and Dustin blush, and Roy and Lee chuckle.

“And how are you doing today?” Lee asks me.

I take a sip of blessed coffee, letting the warmth steal through me, and smile. “I’m doing great. It’s always a pleasure to visit with you guys.”

I turn my attention to Roy.  “Sorry, Sheriff, if you thought having them here would keep me from asking you questions.”

Roy looks me straight in the eyes and replies, “I know better than that, don’t I? Doesn’t mean I’ll answer all those questions, though. Know what I mean?”

I know exactly what he means, and so do Lee and Marshall, although Dustin has no clue. But there are some things Dustin doesn’t need to know and I’m good with that, and so are the rest of them. Some secrets are better left… secret.

“How long have you been sheriff here?” I ask.

Roy tilts his head, thinking. “Well, when I came here, Marshall was what… thirteen?” He looks to Lee for confirmation.

“So I guess about eight years now.”

“Were you a sheriff somewhere else before Burnham?” I ask.

Roy shakes his head. “Nope, first time. Before this, I was a PI. I did some work for Lee, that’s how we met. Then ended up moving here when Lee and Marshall did and just fell in love with the place. When the Mayor asked if I’d be the sheriff I said yes.”

“Burnham is lucky to have him,” Lee says. “Roy is the best.”

Marshall agrees, and all three men exchange warm glances. It’s obvious how much they care for one another, and I feel my eyes start to tear up. I try to be inconspicuous as I dab at them, but they catch me anyway. They all smile, and Lee hands me a handkerchief.

“That’s him all over,” Marshall comments. “Except when he’s being ornery.”

Lee raises his eyebrows. Now Dustin and Roy snicker, while Marshall sticks out his tongue. “You know it’s true. I don’t hear you denying it.”

“I’ll show you ornery when we get home,” Lee warns him.

Gosh, we are so getting off topic here, but I find it easy to be distracted around them. Much as I’d love to be a fly on that wall and see what happens, I know that’s not going to happen, so I won’t even ask. Back to business.

“So, I hear there’s been some problems over in Tucker Falls. Isn’t that so, Roy?”

“Yes, ma—“ He catches himself just in time. “Sorry. The sheriff there is a friend of mine, and he asked me to look into what’s going on.”

Suddenly Dustin won’t look me in the eye, and I have to wonder what is going on with him, with them?

“Lee and Marshall just got married.” Roy deftly changes the subject. Why is he being so considerate of Dustin? I didn’t think they knew each other that well.

“I know, congratulations to you both.” I give the newlyweds a smile.

Lee raises Marshall’s hand to his lips and kisses it before saying, “Thank you.”

Marshall’s eyes are fastened on Lee as he repeats,” Thank you. Best thing that ever happened to me.”

I can’t help but feel a warmth at seeing the happiness they radiate. I glance at Roy, and he seems both happy and… what…. Envious, maybe? Like he wishes he had what they have?

“Roy, you seeing anyone these days?” I ask.

“Nothing serious.” He suddenly busies himself with the menu. Like he doesn’t have the damn thing memorized. Just then Milly comes back and takes our orders, and I decide to leave it for now. I’m sure Roy is capable of finding some young lady who’d be more than happy to go out with him. Probably not in Burnham. But there’s always Tucker Falls.

We’ll just have to see, I guess. I decide to relax and enjoy the company. Sorry, that’s all the information for today. If you want to know more, read The Sheriff. It’s out now. 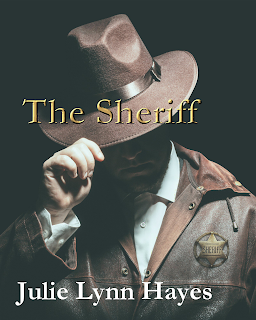 Roy wouldn’t give up being the sheriff of the small town of Burnham, Texas for anything. Maybe the circumstances surrounding his being there weren’t the best, but all’s well that ends well. He couldn’t ask for better friends than Lee and Marshall. And the people of Burnham have been nothing less than welcoming, offering him the position of sheriff after he decided to stop being a PI and settle there with his friends. Even so, sometimes he wishes he could have what Lee and Marshall have. Does such love even exist for him? Right now that just doesn’t seem to be in the cards, as none of his dates ever seem to lead in the right direction. Good thing he has his job to hold onto.

Dustin Johnson hasn’t had an easy life, bounced around between family members since he was young. He first met Marshall in a bar in Tucker Falls, coming to his rescue when he was almost assaulted by a disgruntled would-be suitor, and became infatuated with him. Not taking no for an answer, he kept pursuing him, colliding with Marshall’s partner Lee on more than one occasion. But that’s all done now. He realizes he’s made some mistakes, and he wants to turn over a new life. Beginning with a more permanent living arrangement with his cousin Denver and a job at the computer store. What he really would like to do is work in law enforcement. But Sheriff Roy Landry barely gives him the time of day. What’s a guy to do?

Just when Dustin thinks he’s found the man of his dreams, he learns just how bad a judge of character he really is. He runs to Roy for help, and Roy promises to help him do what is right. Will Roy become the white knight Dustin needs, assuming he doesn’t get killed in the process?

expect to find it. But if you keep an open mind and heart, you might just find what you’re looking for.

Roy Landry raised his bottle of beer in a silent toast to the two men—his two best friends—who had just departed the wedding reception being held for them in Roy’s home. But that was traditional, wasn’t it? The newlyweds were always the first to leave. At least that was the case in Roy’s experience, and he’d been to a few weddings over the years.

Although he was beyond happy for the newlyweds, he was also jealous of them. He envied Marshall and Lee and what they had. He’d never met such a loving, devoted couple in his entire life.  And he’d never seen two people fight so hard to be together. Maybe their relationship was unorthodox in the eyes of the rest of the world, but to him they were perfect for one another. And he was happy to have become a part of their lives, even if the circumstances of their meeting were less than stellar. And he was proud to have been instrumental in their reunion after a horrific five year separation.

Hopefully, they’d have nothing but smooth sailing ahead of them now, to make up for some of that unwarranted turbulence. And hopefully Lee’s ex would never show her face in Burnham again. After her last reception, Roy rather doubted she would.

A voice broke into his thoughts, drawing Roy back to the present. Dustin Johnson stood beside him, long neck in hand.  Dustin’s cousin Denver was a friend of theirs, part of a small group who liked to hang out at a place called Partners, in nearby Tucker Falls. Dustin had helped Marshall out of a difficult situation at Partners—got him away from a pushy jackass who didn’t know how to accept no for an answer and was willing to inflict pain to get his point across. Roy was grateful to Dustin for that. But according to Marshall and Lee, he had the ability to be a real pain in the ass, too, and Lee’d had to put him in his place more than once about his unwanted attentions to Marshall.

Knowing Lee, Dustin should consider himself lucky he only got a talking-to.

All in all, Roy trusted the boy about as far as he could throw him.

“Something like that,” Roy replied evasively. He didn’t think it was any of Dustin’s business one way or another. No, the ceremony he’d performed wasn’t legal, but there was no way anyone would allow that for Marshall and Lee, so Roy had done the best he could, and none the wiser who didn’t already know the truth. Which didn’t include Dustin, or even Denver. Theirs was not a secret to be told lightly, and Roy would never betray their faith in him by telling anyone what he knew.