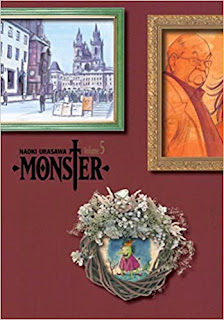 Tenma is hiding on top of a bookcase, rifle in hand, waiting for the moment when he can kill Johan, and end the life he never should have saved all those years ago. Dr. Reichwein has gone to see Herr Schuman, to warn him about Johan, fearful of what Tenma might do. But Schuman insists on going to the ceremony at the library anyway. Once they arrive, he tells Karl he has forgotten something and sends him home to retrieve it. Dr. Reichwein suddenly realizes where Tenma is and rushes out, but he can’t shake Dieter. And the persistent Detective Lunge, who still believes Tenma and Johan are the same person, heads to the library as well to talk to Herr Schuman.

Nina is shocked to learn that Lotte knows Johan and realizes she is a dead ringer for him. And what is this book that scared Johan so?  A Czech picture book about a monster with no name? Meanwhile Tenma has Johan in his sights. All he has to do is squeeze. So why can’t he? And who is this strange woman who has just set the library on fire?

Tenma receives a message, brought to him in the park on behalf of Herr Schuman by his son Karl. He says the mother of the twins is alive and living in Prague. A journalist named Grimmer is seeking information on the East German Kinderheim. He runs into Tenma on a train, and they become traveling companions. But when the authorities stop the train, he reveals his knowledge of Tenma’s identity and tells him to run. Afterward, Grimmer finds the former director of Kinderheim and learns, to his horror, that he has a number of young boys in his home. What is he doing, recreating experiments of the past? Can Grimmer stop him?

The more we know, the more I want to know, as these plots become more and more entwined.  I didn’t think Tenma would be able to shoot Johan, and yet I feel he has to die somehow. I think Nina can do it. Unless of course, there is more to her than meets the eye. I’m not even sure of that anymore.

Did Kinderheim create a monster, or was Johan always that? If he was, what about Nina? Grimmer’s alto ego is pretty amazing, I have to say. And Lunge is so delusional, I can’t wait to see his face when he learns the truth about Johan – that he is a real and horrible person who is not Tenma.

Another great volume of Monster, can’t wait for the next one!