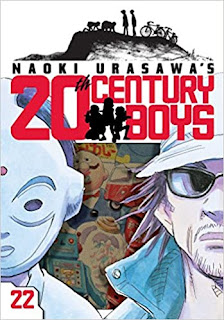 Kanna and the others decide that the only safe place to be, in order to avoid the virus that will rain down from the flying saucers, is Expo Park. But how to get the word to everyone in such a way that they will listen and not panic? Turns out that Kenji’s old enemies, Yanbo and Mabo, created the flying saucers for the Friend. But they say they had no choice, and they are on Kanna’s side now and only want to help. They tell Otcho he has to shoot the saucers down, and he can’t afford to miss. Otcho is up to the challenge, and will do whatever it takes.

Kanna takes a couple of teams to the TV station, expecting to meet with armed resistance, but it is eerily silent. Inside, they encounter Friend’s former assassin, Thirteen, along with the DJ who’s been playing Kenji’s song non-stop, and who turns out to be another childhood friend of Kanna’s uncle. He tells Kanna that Kenji is the one who introduced him to CCR.

Friend’s associates are stunned by his announcement that he is responsible for all the atrocities formerly attributed to Kenji and his group. Can it be true? If so, why, and what are they supposed to do now? Meanwhile, Kanna and the others begin plastering fliers all over town advertising a huge music festival in Expo Park – free! The big draw is that the elusive singer of “Bob Lennon” will be there. Who wouldn’t want to hear him live? Although Kanna entreated Haru Namio to perform, he declines, but shows up anyway with his old band.

Maruo and Keroyon and his son discover a group of masked children who lead them into a toy store, to their masked leader, whom they’ve dubbed the Mask King. He turns out to be another of Kenji’s childhood friends. Maruo and Keroyon vaccinate the children, and they are shown a way to get into Tokyo, over the wall.

Once they manage to cram all the people they can into Expo Park, the flying saucers are unleashed. But they aren’t headed in the direction they expected. In fact, they’re going straight to Expo Park! Did they just lead everyone into a trap? And the Giant Robot has been activated prematurely. How will this possibly end well? Will Friend’s insane plan be put into motion?

Wow, wow, wow. So much going on. So much drama, conflict, violence, hope, suspense… everything but resolution. Because this is not the last volume, contrary to popular belief. Good thing, because the ending, though sweet, isn’t enough, and explains so little and leaves so much hanging.

I confess to being angry at first at the ending, until I dug a little and discovered the story continues in Twenty-first Century Boys, which consists of two volumes. Okay, I can live with that. There is a certain amount of resolution in this volume, but there are people who need to be dealt with before the world can truly be safe. Or maybe the question is, can the world truly be safe?

All I can say is … to be continued.