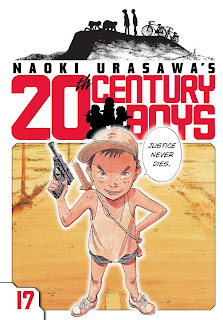 The unthinkable has happened… the world as they knew it has been destroyed. Three years later, Friend is the President of the World, ruling from inside the walled fortress that is Tokyo. The Global Defense Force ever keeps watch for the alien invaders that are predicted to be coming. But of course they are watching for humans as well, those deemed unworthy to be a part of society. What will they do to them?

Kamisama sits in a deserted bowling alley, waiting for bowling to become a thing again. The same bowling alley he built years ago that ruined the secret hideout of Kenji and his friends. With him are Otcho and the two young people who secretly helped him when he was injured, siblings Sanae and Katsuo. Kamisama recommends Otcho go to the Catholic Church for help with the Friend. He shows them a secret way to get there, but the passage is too small for Otcho, so they send the kids instead, as the passage is well marked, and he will meet them there. However, Katsuo becomes distracted by an old subway car, as he’s never seen one in his lifetime, and this small detour leads them to a member of the Genji faction. They try to help him but he begs them to take a message to the Ice Queen to warn her against going through with her plans, as there is a spy among them. The brother and sister have to split up. Sanae goes to deliver the message to the Ice Queen and Katsuo heads to the church.

Everyone who went to see the Expo was sent a vial of the vaccine. Those who didn’t go died of the virus. So vaccine is at a premium, and people are willing to take desperate measures to obtain it. Sanae finds the Ice Queen in a small ramen shop, and is surprised at how young she is. Turns out, she already had her suspicions concerning a spy in their midst and confronts him about it. Of course, it was all about the vaccine.

During Year 1 of the Friendship Era, Otcho is traveling with a group of men through the countryside, when a rider on a motorbike stops to deliver a package to one of the men. Turns out to be a vial of the vaccine, and what a can of worms that opens! Wounded in the scuffle, Otcho is helped by a man who lives in a nearby village. But things take a turn for the worst, and they aren’t what they seem. He remembers something Kenji told them when they were kids: “Justice never dies!” He also said, “…I’m saving this world from evil, no matter what happens!”

Back to Year 3. Kanna’s former associate, Officer Chono, is assigned to guard duty at a remote outpost where nothing ever happens, watching for aliens that may never come. He sees injustice all around him and he is incensed by it. By accident, he stumbles on a group of people who are illegally assembled in the quiet of the night, listening to a radio that should not exist… and he hears a song from long ago…

Gosh dang, this is so good. Every volume leaves me in great suspense to know what will happen next. I have my suspicions about the music, because it goes along with what I’ve been saying all along. Hopefully I will be able to crow about it in the next review.  The identity of the Ice Queen is no real surprise. I like the new kids, very brave and very strong characters. There is a brief mention of the Holy Mother, but no appearance. Also no Friend sighting in this volume, which works for me. He is beyond creepy, and the more I learn about him, the creepier I find him to be. I can’t help but wonder what’s with the Friend and aliens? A diversionary tactic or something more?

Great volume, can’t wait to read the next one!