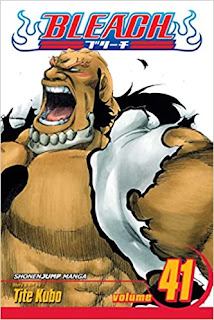 Although it appeared as though Ulquiorra defeated Ichigo, that turns out not to be true. But is the creature that rises from the proverbial ashes really Ichigo? If so, what is he now, and how did he arrive there? Neither Orihime nor Ulquiorra can believe their eyes. While Ulquiorra questions him as to who he is, he receives no response. But whoever this is knows how to fire a cero! That is something no mere human can do.

And so the battle continues…

Meanwhile, Rukia’s battle with Rudbornn is interrupted by the unexpected appearance of Yammy, who is really angry with Uryu. Chad marvels at Yammy’s size, having fought with him in the World of the Living. “He was huge back then… but he’s a whole lot bigger now!”

Orihime realizes that this is still Ichigo, there to protect her, as he returns to himself. Ulquiorra is in bad shape. While he can regenerate limbs, that is not true of his organs. He wants to finish this now, but Ichigo tries to attain an even playing field. Ulquiorra tells him, “Hmmph. To the very end, you never do what I want you to do.” He asks Orihime if she is afraid of him and she says, “I’m not.”

Yammy is resolved to avenge Ulquiorra. The others are initially not concerned, as he is Espada 10, and they’ve defeated worse. But then Yammy reveals that they are wrong about the Espada ranks, and he is actually 0… and bigger and badder than they ever imagined!

The other captains’ fights continue. Shunsui receives the grudging admiration of Starrk, while Hitsugaya battles Harribel, and Komamura stands guard while Lieutenant Kira heals the others. Soi Fon and Omaeda face off with the old man, Berrigan, who reveals the true nature of the Espada’s powers – each governs a different form of death. His is senescence, or aging. When he touches Soi Fon’s arm, which begins to rot, she makes an instant decision and demands Omaeda help her immediately! Harribel thinks she has triumphed over Hitsuygaya, because she can also control water. But Hitsugaya lets her know she has far underestimated him.

Decisive battles are being waged here, more enemies defeated. You just know that at some point, Aizen has to be let back into the fray, or what’s the point of him being there? I enjoy the strange relationship between Soi Fon and Omaeda, and I don’t think she really hates or despises him the way she seems to. And he isn’t as weak as he thinks he is. Shunsui is handsome, as always, always glad to see more of him. I loved the battle with Hitsugaya and Harribel. People too often overlook him because he resembles a child, but he is far from that and he is far stronger than people give him credit for.

The most touching part of this volume was the scene between Ulquiorra and Orihime, which made me tear up, and earned Ulquiorra my reluctant admiration. Still loving this series and looking forward to the next book!