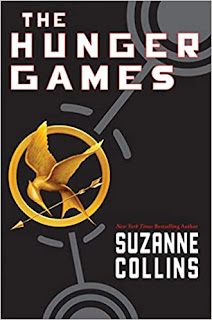 In the aftermath of a devastating war, what was once North America is now a nation known as Panem, comprised of the Capitol and twelve outlying districts. Once there had been thirteen districts, but the thirteenth had rebelled against the Capitol, only to be destroyed. As a reminder of what happens to those who don’t obey, the Capitol conceived the Hunger Games. Every year, each remaining district provides two contestants—one male, one female—who are chosen by lottery to represent their district. The contestants are sent to the Capitol to participate in the games, pitted against one another to fight until only one person remains. The last person standing is then crowned the winner, their district receiving benefits from their win. All of which is televised to the entire nation.

Times are hard for everyone. Catniss Everdeen lives with her mother and younger sister Prim. Catniss supplements their meager diet by hunting, which is illegal as it takes place outside the area where they are allowed to go. But survival calls for desperate measures, so Catniss continues to hunt, along with her hunting partner, Gale. She also forages for various herbs and vegetables, which she has learned from her mother, who is a healer.

Time for the Hunger Games again, and everyone attends the drawing of the two participants. Catniss only wants her family to be safe, so is unprepared to hear the first name drawn is Prim’s. Without hesitation, she volunteers to take Prim’s place, and her offer is accepted. The male volunteer turns out to be Peeta Mellark, the baker’s son. Catniss and Peeta are escorted to the Capitol by Haymitch Abernathy and Effie Trinket, the former a drunken fool and the latter an excitable fool.

Catniss hopes that she isn’t killed too quickly, not holding out hope of winning the games. But she is tougher than she realizes, and maybe, just maybe, she can survive this thing if she tries.

This is a really creative story about a dystopian future society filled with barbarism and inequality. The poor have a rough life, while the idiots in the Capitol go blithely about their merry way, watching the annual slaughter that is the Hunger Games. Catniss is a very good, well-written heroine, and Peeta is easily her counterpart. Watching them grow and develop throughout the book, and watching them work together to defeat the others, is priceless. Catniss is a typical teenage girl in that her emotions are all over the place, especially under the circumstances. But she comes through it all with great grace and aplomb.

I really hope this sort of society never comes to be, but I can also see it happening, too, especially in an oligarchy, such as we in the US live in now.  The first book in the trilogy is riveting. Looking forward to the next one.