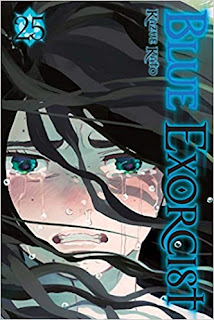 The Blue Night has begun…

A rapidly deteriorating Satan has found what he has sought, namely Yuri. But in his mind, he thinks she has betrayed him, so seeks her destruction. Father Fujimoto helps Yuri to deliver her second son as the others keep Satan at bay. At first, he is not responsive, then he takes his first breath, to her relief.

At that moment, who should appear but Sir Pheles himself, who announces he is in charge, following the death of the Paladin. He tells everyone else to withdraw and then proceeds to discuss matters with Fujimoto. Pheles tells the priest that no ordinary sword will kill the son of Satan, as the first child continues to fly out of everyone’s reach, but perhaps the Koma sword could. Too bad he gave it to a young monk a long time ago. Nevertheless, Fujimoto struggles to kill the child, only to have Pheles give both children to their grateful mother. A jealous Satan appears and begins a standoff with Father Fujimoto.

Fujimoto takes Yuri and the babies and escapes. She decides on their names.  The first one is Rin, like a Rinka, since he burst into blue flames. The other one is Yukio, because Yukiotoko are strong and warm! Yuri and Shiro make plans for the future, their future with the babies. But alas, Yuri’s health fails her and she dies, to Shiro’s grief. He protects the babies as best he can.

In the aftermath of the Blue Night, everyone begins to pick up the pieces, even as Samael makes a deal with his father to provide a proper vessel for him, as does the traitor Dragulescu. Pheles leaves the kids with Shiro to raise, but he’ll have to change some of his ways. And it won’t be easy. He becomes the next Paladin, and does his best to bring up Yuri’s boys, always mindful of the power inherent in Rin. Up until the moment when Rin’s father reappears to try to claim him…

And so we reach the end of the past. Rin has seen it all and now he understands so much more than he did before, primarily that he is not an abomination or a mistake, that he and his brother were loved and wanted by their parents, but fate would not allow them to be a happy family.  He uses the key to return to his brother, who is about to…

This volume of Blue Exorcist is jam-packed with action. So much going on, so much explained. So much tragedy. And yet from all of this we know Rin and Yukio will emerge much stronger for the experience. The love story of Yuri and Satan has come to a tragic end, but that isn’t exactly news. We’ve known that since the beginning. But it’s just heart-breaking to see it play out. I couldn’t help but wish they could have been together. I like Shiro, and I’m sorry his story came to such an end, but he was a good father to the boys, and taught them much. Mephisto Pheles is still somewhat of an enigma, but I have to believe there is more good in him than not, even if he loves a good joke at the worst of times.

There is so much to be done, but I’m sure that Rin and Yukio can succeed, if they only stay together, a united front. Another great volume, looking forward to the next!