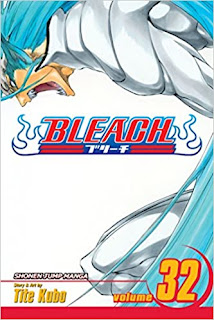 Nel and Orihime are stricken at the idea of Ichigo having to face down Grimmjow yet again, but he assures them everything will be all right. Heartened by his words, Orihime reassures the still upset Nel that Ichigo is a man of his word, and if he says he will do something, he will. Grimmjow continues to taunt Ichigo until he releases his inner Hollow, which frightens Orihime. Is this the same Ichigo she has always known? Now it is Nel’s turn to tell Orihime to have faith and to cheer on Ichigo, for if they don’t, who will?

Gillians are the lowest class of Menos. They consume souls to the point where they lose all individuality. But occasionally, one of the consumed Hollows takes control of the others and dominates, continuing to consume until it becomes an Adjucha. If this Adjucha doesn’t continue to eat Hollows, it will regress into a Gillian and then there is no coming back from that. This is the perpetual fear that keeps them going. Grimmjow was once such an Adjucha, who continued to climb in the ranks until he became an Espada. He never wishes to go back again, so he must defeat Ichigo.

Although, if he fails, there is always another Espada waiting in the wings…

This volume of Bleach is concerned with the ongoing epic battle between Ichigo and Grimmjow, both of whom are determined to win. This fight was inevitable, considering their history together.  Orihime and Nel are helpless to do other than cheer Ichigo on, but never underestimate the value of a good rooting section! Reading about how Grimmjow became what he is was interesting, and gives us more insight into the hierarchy of the Hollows, as well as their development.

There is also a bonus story concerning Hitsugaya which I enjoyed.

Looking forward to the next volume!