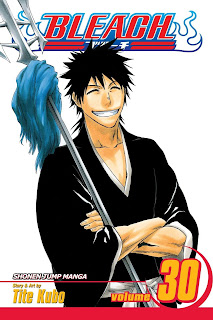 Chad’s newly realized powers stand him in good stead in his battle with the Arrancar, who wishes him well, but suddenly tells him to run. Another opponent has entered the field, Nnoitora, who seems unimpressed with Chad’s strength. T

The others feel Chad’s loss but there is nothing they can do at the moment as each has their own problems. When Ulquiorra relays the information to Orihime, she confidently tells him that Chad is not dead.

Rukia finds herself drawn into a building by a strange masked man. Once inside, he removes his mask, telling her his name is Aaroniero Arruruerie. But Rukia knows that face too well to be fooled, for he is none other than Kaien Shiba, one time second-in-command. But Kaien is dead. She should know, as she killed him herself!

Renji and Dondochakka fall into a trap and find themselves face to face with Szayel-aporro Grantz, the octava Espada. Renji, confident of his ability to take down this foe, attempts Bankai only to learn that Bankai cannot be performed in this room. What’s a guy to do?

This volume of Bleach is mostly concerned with the battles being fought by Renji and Rukia, especially Rukia. Rukia is forced to confront her demons, and the guilt she continues to feel over the death of Kaien Shiba. Almost to the point where she believes she deserves to die for what she did. We see flashbacks of what happened, and it’s impossible not to feel her pain.  On the other hand, Renji and Dondochakka is like the comic relief of the volume.

And at the very end, two people confront one another. Will this lead to a battle? Gotta wait for the next volume to find out.

Another great volume, looking forward to the next one!