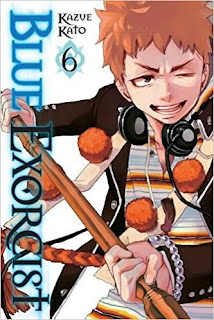 The ex-wires are in Kyoto to help guard the Right Eye of the Impure King. Everyone is surprised to discover they are staying at the inn belonging to Suguro’s family. The next morning, some of the guys don’t remember the night before very well, and they blame it on whatever Shura gave them to drink. Konekomaru is confused as to why Renzo is acting so friendly toward Rin. Doesn’t he remember who and what he is? A meeting of the Myodha is being held, but Ossama is nowhere to be found. He sends word that he is busy and unable to attend. Renzo’s father, Yaozo, rises from his sick bed to inform the meeting that there is a traitor in their midst! It’s revealed that the right eye has been stolen, and six people are the major suspects, including Ossama, Juzo Shima and Mamushi Hojo.

Rin’s training isn’t going well. His first task, and he keeps blowing it! Literally. Shura set up three candles with instructions to light them, but he can’t control his power and keeps melting them. Suguro confronts his father, but to no avail. He disowns him just before his father disappears, only to be yelled at by Rin. They get into an altercation, to Shura’s great annoyance. Rin goes a little too far and finds himself revealed and incarcerated.

Yukio arrives on the scene only to learn the Right Eye has been stolen as well, and the chief suspect is High Priest Tatsumo Suguro! Yukio reveals that when the eyes come together, a poisonous gas is released! They must be found. A letter arrives for Rin from Suguro’s father, but neither Rin nor Shura can read it. Luckily Yukio can, and what a tale is revealed!

The action is getting hotter and hotter as the ex-wires are thrust into the fray. This is no exercise, this is reality! If those eyes aren’t found before they are connected, everyone will be in danger! We learn a lot in this volume, and glimpse more of Suguro and his father. Also, we watch Rin working hard to control his flame as he learns to work for the common good, a sure sign he is maturing. We see more of the softer side of Shiemi, as well, who is always ready to volunteer her help to others.

I find that the story of the Left and Right Eyes is making more sense to me now, and it’s an interesting story. I like the way the story is developing, and I find it interesting that more than a few people are suspicious of Mephisto Pheles. I’m sure he has quite a story himself.

Another great volume, looking forward to more of the same. I’m also watching the anime, although I’m only a few episodes into it, but I really like it.