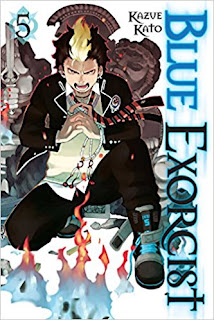 Well, the cat’s out of the bag, and all the ex-wires know Rin’s secret—namely that he is the son of Satan. They have mixed feelings about this revelation, understandably. But no time to dwell on that, Yukio and Rin are off to deal with an emergency situation. The trouble began when someone stole the Left Eye of the Impure King from the Deep Keep. A senior exorcist named Todo, along with an elite force, pursued a masked man but he’s taken a child and is using him as a shield. To make matters worse, a terrible gas has been released, and the hostage child has received severe exposure. The child’s mother begs for help, and when Yukio tries to explain that they might not succeed, Rin rashly promises to rescue her son. The brothers and Todo and his elite force are off to the rescue! But not everything is as it seems.

Meanwhile, back at True Cross, Suguro, Shima, and Miwa are concerned that they are unable to contact friends and family back home. Mephisto unexpectedly turns up in the ex-wire classroom and announces they have earned the right to go on a real mission—to Kyoto! To say that Suguro is less than thrilled would be an understatement.

Rin thinks he’s being sneaky but Shura catches him practicing in secret and tells him to pack, he’s going to Kyoto. Apparently the Right Eye of the Impure King is also in peril. On the train to Kyoto, Rin discovers the other ex-wires are going as well, but nobody seems particularly happy to see him, much less sit with him.  Shura tells them all to behave so she can get some sleep, but how likely is that?

On arrival in Kyoto, the ex-wires go to the inn where they are to stay, only to be met with some surprising information that a certain someone would wish to remain unknown. As they settle in, they get to know the okami (female innkeeper) and her family. Suguro realizes there is a problem there. He has to take charge  or two quarreling families will tear everything apart!

The ex-wires are unsure how to handle their new knowledge about Rin, and it shows. Rin is becoming frustrated because he thinks nothing has really changed, he’s the same guy he was before, but how can he convince them of that? In this new volume, Rin is as headstrong and determined as ever. He’s a good boy at heart, who’s found himself in a difficult situation, and still has some maturing to do. And he’s still determined to defeat Satan one day. Also in this volume, we get some background information on Bon Suguro, which helps to flesh out his character and make him more likeable.

I’m really interested in finding out more about these stolen Eyes. What’s so important about them that someone wants to steal them? Will Rin’s fellow students ever get over his satanic birthright and accept him for who he is? Will Rin ever find the courage to admit he likes Shiemi? Enquiring minds want to know! Good volume, looking forward to the next one.