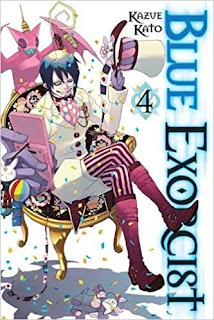 Summer camp isn’t exactly idyllic for the ex-wires, who’ve been sent on a strange mission involving a lantern. Through trial and error, they discover that the only way to accomplish their mission is to actually work together, despite their first impressions that they needed to work alone. Shura is convinced that Rin will expose himself to the others (no, not like that lol) and when she sees the blue flame, she is convinced she was right. But appearances can be deceiving, especially at night. Matters are complicated by the unexpected arrival of Mephisto Pheles and Amaimon, unbeknownst to the others.

The lantern in question turns out to be more than the ex-wires anticipated, and getting it back to camp will be no easy task. They’ll have to utilize everyone’s unique skills to get the job done. In other words, it takes team work to make the dream work!  At least until Amaimon throws a wrench into the works!

Back at the academy, they are met by someone new – Arthur Auguste Angel, a senior exorcist first class from Vatican Headquarters. He has nothing but criticism for both Mephisto and Shura for having failed to carry out their mission properly, as evidenced by Rin’s presence among them. Will Rin suffer the ultimate punishment for being his father’s son?

And then an emergency summons takes the gang… to Kyoto?

I’m enjoying this series more and more. We are learning more about the characters as they interact with one another, and some backstories are starting to be told. There’s never a dull moment, especially when Mephisto is around. Although he is mostly cool and contained, the same cannot be said for his brother Amaimon, who is a hot mess, and that is being kind. I love the artwork. My only real complain is the need to constantly expose more of Shura’s chest than I’d care to see, but I guess we can chalk that up to fanservice, and the fact that this series is probably aimed at young teenage boys.

The action is moving right along, and I can’t help but wonder where it’s going. I’m glad I’m along for the ride. Another great volume, looking forward to more of the same.