Virtual Book Tour: Take Me As I Am

Please welcome author Charmaine Ross, who is here to talk about her new release, Take Me As I Am. Charmaine will be awarding a copy of the eBook (international) to three randomly drawn commenters via Rafflecopter. The more you comment, the better your chances of winning. To see where the other stops on her tour are, go here. Don't forget to look for the Rafflecopter at the end of this post!


The Questions
1) You’re marooned on a small island with one person and one item of your choice—who is that person and what item do you have?
Sven – a tall, golden-god of a masseuse and a bar of organic soap. I don’t like to be stinky.

2) Which musical would you say best exemplifies your life – and which character in that musical are you?
I’m Eliza Doolittle in My Fair Lady. I like to unleash my inner bogan in times of stress, I like swearing occasionally and I don’t think you always have to act like a lady and when you do, it’s only for show.

3) Take these three words and give me a 100 word or less scene using them: hammer, saucer, traffic lights
Now you’re really making me work. LOL. Okay – I pulled up at a set of traffic lights. Another red light and I was already late. Damn. I spotted a golden-god of a swiss masseuse walking down the street, then I saw he held a hammer. It was none other than Thor. I looked at him with saucer eyes before he disappeared in a blinding flash if white lightening.
How was that. You didn’t say it had to make any sense. ;-)

4) You’ve just been let loose in the world of fiction, with permission to do anyone you want. Who do you fuck first and why?
Scott Eastwood – have you seen that guy? Man – he’s hero worthy material! In fact, I don’t even need a reason. Just because he exists is good enough reason or me. (Me currently biting my knuckle as I image)

5) What is your idea of how to spend romantic time with your significant other?
Can I just imagine I’m on a date with Scott? That’s a much better idea. OK – so with Scott, there’d be no need for food, or chocolates, or restaurants. Just a crackling fire place, a snowed in cabin somewhere deep in the woods and a really good bottle of fifty year old scotch. Heaven!

6) When you start a new story, do you begin with a character, or a plot?
I begin with a ‘what if’ – like – what if I was twenty years younger, looked like Taylor Swift and met Scott Eastwood in a snowed in cabin deep in the dark woods… Sorry, I’m still stuck at the last question. Erhmm. Okay, serious now, I start with a situation and work my characters around it. I think who could I put in this situation that would be the most uncomfortable, the most tortured, make the most dramatic, stupid decisions, then I weave a backstory, give them flaws, hope and a really good sex life. Bingo!

7) If they were to make the story of your life into a movie, who should play you?
Taylor Swift opposite Scott Eastwood. LOL.

8) Who’s your favorite horror villain and why?
I like Professor Snape, because he mean and nasty but there’s a whole other side to him that no-one knows about.

9) Do you have an historical crush and if so, who is it?
Mr Darcy of course – what I wouldn’t give to go back in time and play Elizabeth Bennett! I’d make him to that scene in the lake several times over before I’d completely let him ravish me from head to toe. Sounds like a plan. Anyone seen my time machine?

10) Is there a story that you’d like to tell but you think the world isn’t ready to receive it?
How about a sexy neon blue alien with six pack abs crash lands half way up a mount and I’m a forest ranger sent to investigate the plane crash. Only it isn’t a plane. It’s a UFO and the alien is injured and waiting for his friends to come and pick him up and when they do, they have to take me along with them because now I know the truth and they take me to a planet where woman are rare and coveted and he gives me a housekeeper, a chef, a gardener and I don’t have to do any chores ever again and he makes devastating love to me every night with multiple orgasms. Pretty darn exciting if you ask me! That’s a movie I’d like to see.


Thank you so much for having me here and I hope you’ve enjoyed reading a bit about me. As a thank you to your readers I’m offering two free fun and flirty novellas on my web site when you subscribe to my very sporadic email. I also have free sample chapters on my web site. It’s worth a look@ www.charmaineross.com

Take Me As I Am
by Charmaine Ross 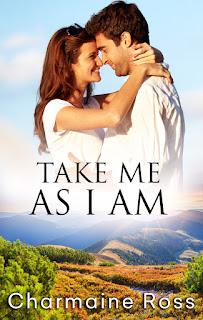 BLURB:
Forget the whole billionaire tycoon thing: Kate Moore is a billionaire’s daughter, and she knows first-hand that they’re not all romance novel worthy. Her father is brilliant, inflexible, and brutal – and nothing she’s ever done has been good enough for him.  Her one chance to take over the massive Moore’s Hotel Corporation is restoring the run-down Burnham Beeches in beautiful Sassafras to its former glory. To that end, she hires David Wright, a talented landscaper with an unparalleled eye for beauty and an unparalleled talent for distracting her from her goal.

David really needs this job. He needs the contract, the Moore’s name on his portfolio, and the money to pay for his ailing father’s health. Everything he’s worked for is now within his grasp, and he’s going to reach for it with both hands. What he doesn’t need is the diversion, or the temptation, presented by his new boss.

His hand lifted to her hair, his fingertips brushed where some of the ends curled. It slipped around a finger and he watched the burnished strands in the light. There was gold and honey and shining browns, gleaming like silk.

She moved her head, just a little, but it was enough for his fingertips to graze her jaw. Silken skin slid beneath his touch. He traced the line of her jaw then his hand cupped her nape, her hair falling gloriously over his forearm.

He waited her for to move away, but her eyes found his and caressed him with a look he couldn’t deny. He bent his head, lips brushing hers. Her mouth yielded and he pressed more firmly against them, taking her lips between his, moulding his mouth to hers.

Slowly, so slowly, her hand settled on his shoulder, a touch so light he barely knew it was there. But he did and the hot coals inside his gut flickered into a flame. He opened his mouth, brushed her lips with the tip of his tongue, tracing the line of her lower lip.

She sank into him, her hand crawling behind his neck as her other hand found his upper arm. He wound his free hand behind her waist, anchoring her against him. Her soft breasts pushed against his chest, her heat infusing through their clothing.

Her mouth opened, tongue caressed tongue, before he plunged into the hot, honeyed centre of her mouth. She met him move for move, tilting her head to deepen the kiss, their mouths, lips, tongues igniting their own private dance.

His brain was clouding with need, insanely intense, as though he were climbing to a peak only she would quench. His senses were attuned to hers, his skin sensitive to her touch, the tangible weight of her body against his.

Then that little niggling voice broke through the misty realms of his mind. The fog cleared, an inner voice nagging him for … something. Some reason he couldn’t quite connect with. There was nothing he wanted more than this woman in his hands to feel, explore, taste. Then the voice became louder, irritating the sensuous web that caressed him.

The voice harassed him, badgering away the misty recesses in his brain. Reason. Boss. She was … is … his boss. What, in hell, was he doing! 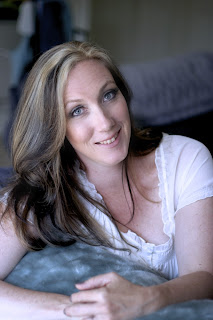 My first foray into romance was as a fourteen year old where I fell hopelessly and eternally in love with my hero as only a teenager can. Instead of watching movies and staying up late, I would go to bed at eight thirty and continue my very romantic, very safe, love affair.  Since then, I have fallen in love with many heroes, some less safe than what my teenage brain could possibly imagine. After earning a Fine Art’s Degree, a Diploma of Secondary Education and a Diploma of Marketing, I worked as a Graphic Designer in various advertising agencies as well as in-house marketing roles and am currently involved with digital marketing and everything web in my current position. But I always return to writing.  Although I have travelled, I always return to my home town of Melbourne and live with my husband, two children and two cats in the ferny-greens of the Dandenongs. If I'm not working on my latest romance and falling in love with yet another hero, you’ll find me reading, watching and basically indulging in my addiction to any story on any media type I can get my fingers on.

Check out my web site to download and read two fun, flirty novellas - the best news is they're free - plus free chapter downloads from all of my books, as well as updates on my latest news @ www.charmaineross.com