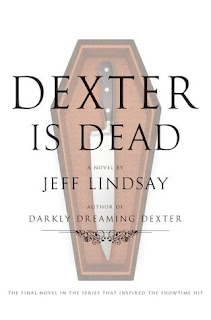 Dexter finds himself incarcerated in a correctional facility, ironically, for murders he did not commit. His wife, his girlfriend and future meal ticket, as well the pedophilic actor who was putting the moves on Astor, Dexter’s stepdaughter.  It seems as though everyone is against Dexter, and wishes to do him harm. Especially Detective Anderson, whose sloppy attempts at manipulating evidence are responsible for Dexter’s current predicament. Even his sister has turned her back on him. Where is the so-called family loyalty demanded by the rules according to Harry? Gone with the wind, apparently.

Assistance comes from an unusual source, his sociopathic brother Brian, who arranges for a top-notch lawyer, who gains Dexter’s release. Hooray! Except not. It seems Dexter has just stepped into a hornet’s nest of Biblical proportions, and bodies seem to follow in his wake, ones he did not cause. As if to compound matters, his children and Deborah’s son have been kidnapped, and the race is on to rescue them before the kidnappers take out Dex and Brian.

This is the last book in the series, and as such I felt obligated to read it, despite having despised the one that came before. But… O.M.G…. I want that time back, and to un-know what I just read.
I’m sorry but this book stunk to high heaven. It had long stretches of super boredom, of Dexter’s deep introspection and what not, and whereas I normally can enjoy such perambulations through the mind of Dexter, this was off. Way off. It felt as though Lindsay forgot how to write Dexter properly. Like he’d substituted a “margarine” Dexter for the “butter” version. It may look similar, and taste somewhat close, but the composition is not the same and leaves something to be desired.

I know Dexter enjoys his meals, but good Lord, he seems to have become a real glutton in this one.  Food tours? Seriously? And maybe that has to do with his lack of employment, but I don’t think so. Not to mention, the normally acute Dexter failed to pick up on clues that I got right off the bat, like a certain vehicle that seems to be everywhere. And the time he caught his lawyer speaking Spanish to someone over the phone. I know, in Miami, that’s not suspicious. But under the circumstances, it is.

The only redeeming point, and for which I gave it the single star I did (that and you can’t rate below a 1) are the scenes with Brian, which I’ve longed for for some time. However, these don’t make up for the rest of the book. Even characters such as Deb and Vince Masuoka are mere shades of their normal selves.

And the ending…. Is beyond horrible. The title does say it all, and believe it, he is. I’m glad. I wouldn’t want him to be embarrassed any more than he must be at such an ending. Mr. Lindsay, I am ashamed of you for permitting this to happen, and also, where is your editor, and why didn’t he or she tell you how bad it really was, to save you from making such a mistake? He/she did you a great disservice.

I know Dexter aficionados will read it for the same reasons I did – because it’s Dexter, and Dexter is awesome, and for closure for the series. Well, closure is all well and good, but boredom is another matter, and indignation that one of my favorite serial killers should go out with a decided whimper, when he should have had a bang.

My suggestion is to not read the book and remember Dexter fondly.
Posted by Julie Lynn Hayes at 12:01 AM