The Son of Neptune Review

The Heroes of Olympus: The Son of Neptune 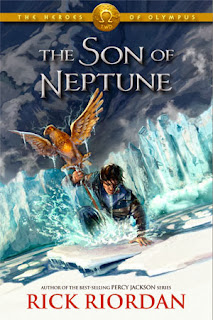 Percy Jackson finds himself high on a hill above San Francisco, battling pissed-off gorgons, who are angry with him for having destroyed their sister, Medusa. The trouble is he not only doesn’t remember doing such a thing, but he doesn’t know why he’s there or what’s going on. The only thing he remembers is Annabeth, and she’s not there and he doesn’t know where she is.

Leaping from the hill to evade the gorgons, Percy spots what looks like a secret entrance in between the two sides of the highway. It’s guarded by what appears to be kids dressed in ancient Roman garb. Percy has the feeling he’s reached his goal. And yet he keeps thinking he’d be better off, and safer, in the ocean. Just then an old hippie lady approaches him, tells him her name is June and he has to choose, and make it damn quick. He can leave her at the mercy of the gorgons, who are even now approaching, or he can carry her to the camp—across the highway, through the tunnel, across the river.

Percy isn’t sure about that at all, but he decides to do it. The old hippie lady turns out to be none other than Juno, the guards he meets are Hazel and Frank, and he finds himself arriving at Camp Jupiter, home of the Roman demigods.

Camp Jupiter is set up much like ancient Rome, and it is ruled by praetors Reyna and Octavian. Their previous praetor, Jason Grace, has gone missing. They reluctantly admit Percy into their ranks, for it’s rather hard to ignore an augur from a goddess such as Juno, and he is assigned to the Fifth Cohort, also known as the losers of the camp. Frank and Hazel belong to the same cohort. Hazel is a daughter of Pluto, while Frank, who is part Chinese,  hasn’t been claimed yet, much to his chagrin.

The Son of Neptune is the second book in the Heroes of Olympus series. In the first book, we met Jason Grace, a Roman demigod who found himself mixed in with the Greek demigods of Camp Half-Blood. A prophecy spoke of an exchange. Well here it is. Percy is at the Roman camp, Camp Jupiter. And Gaea is still threatening to destroy the world as they know it, unless both sides can manage to work together, despite their long history of being enemies. Can they put their egos aside long enough to cooperate?

Another great entry in the series, with lots of adventure and excitement as well as great character development. I enjoy the way the author makes them all come alive, and it isn’t hard to accept them as demigods or to become invested in their world and their struggle to maintain their way of life. As usual, the gods aren’t much help, and the demigods are pretty much on their own, battling giants and harpies and grain monsters and more.

No one is exempt from dying, and the struggle to defeat Gaea won’t be an easy one. It’s great to have Percy back, and I look forward to seeing what happens in the next book in the series, The Mark of Athena. Make sure you start with Percy Jackson and the Olympians before you read this series. They should definitely be read in order.

A great series for all ages.