Starting the New Year with a new release!

After Wicked Nights folded, my series Forbidden, which was still in its infancy, was left rather stranded. But it has found a new home with Romance First Publishing! Just released today, in fact! 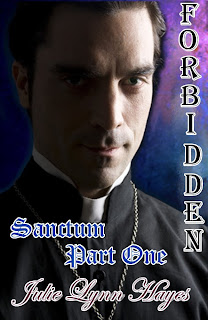 The year is 2056 AD. The place—the Alliance of States, once the United States of America. The country is struggling to come back after the Armageddon which took place in the year 2032, under the leadership of President Alistair Boothe. Life is hard but not impossible. The church and the state have been closely woven together, for the good of the people. Infant mortality has risen, the birth rate has declined. Recognizing the futility of imposing celibracy, the church now allows its priests to marry women. Homosexuality is still forbidden, and pedophilia is punishable by death.
Jerico James is handsome, spoiled and willful—a rich boy with too much time on his hands. When he steps out of line once too often, he finds himself sent to one of the nation’s help centers to serve his community service, under the guidance of its director, Father Sergio de Basco. The moment he sees Sergio, Jerico is struck by the priest’s beauty—and determined to have him, no matter what the cost.
Excerpt:
Jerico didn’t want to go to Sanctum.  He didn’t want to become no more than an unpaid overworked laborer, a servant of the state, toiling for the betterment of the poor and downtrodden, the huddled unwashed masses. But the alternative undoubtedly involved serving time in one of the federally mandated prisons. No one wanted that.  Conditions had become so harsh, at least from the stories which had been gleaned from former inmates, that the mere threat of penal incarceration had become an actual deterrent to crime. There were whispers of punishments carried out within the high prison walls that went far beyond any treatment ever mandated by civilized nations, of tortures not seen since the days of the Inquisition. But no proof existed, and the stories were denied as being the tales of criminals. It was better to play safe than sorry. Money did still have its privileges.
“Dru.” He changed tactics, switching to his wheedling voice, the one which usually got him anything he desired from any woman he desired it from, even his sister. When Jerico was little, he couldn’t quite manage to say Jerusha, and his childish lips had run all the syllables into one—Dru he’d called her, and Dru she stayed, especially in moments such as this. “Dru, can’t Micah do something about it? Isn’t that why I pay him all that money, to handle these things?”
“Father pays him all that money, you mean,” she replied without batting an eye or giving an inch, “and he’s doing what he can.” Micah Caulfield was Jerusha’s handsome older husband. A close associate of their father, he was one of the best attorneys working for the government of what was now known as the Alliance of States. Or more precisely for its President, Alistair Boothe. Micah was also the one that pulled Jerico out of the trouble he invariably got himself into.  His lifeline, as it were. But this time, Jerico had embroiled himself too far for even Micah to extract him.
They threaded their way through the roiling masses of humanity, too focused on their own destinations to pay attention to the brother and sister in their midst. Wherever they were heading, Jerico was pretty sure it wasn’t where he was going.  Not very likely, anyway.
It would be so easy to just skip out. To get on another bus, go to another place, and once there to lose himself in the crowds of that new city, become someone else and forget all this bullshit. But there were reasons why that couldn’t be. One was that he’d never supported himself in his entire life, and would be somewhat at a loss to do so. The second reason was that although he was walking side by side with Jerusha, he was more than aware that he had an escort just a few paces behind them. Someone whose sole purpose in being there was to make sure that Jerico James boarded the bus to Sanctum. The third reason was the chip which had been implanted in his left wrist by the court. If he were to go somewhere outside of the help center, he would set off alarms whenever he passed by any of the government sensors. And since no one knew exactly where those were located, just that there were an unknown number of them, the chances of being caught were pretty good.
All in all, Jerico had to admit he was pretty well screwed and without any choice in the matter—apparently he was going to Sanctum.
Posted by Julie Lynn Hayes at 1:04 PM