Good morning everyone! Please welcome author Nicole Sallak Anderson to Full Moon Dreaming! She is here to talk about her Song of the King's Heart trilogy, with excerpts from the second book, Blood and Chaos. Nicole will be awarding a $50 Amazon/BN GC to one randomly drawn commenter via Rafflecopter during the tour. The more you comment, the better your chances of winning. To find the other stops on her tour, go here. Don't forget to look for the Rafflecopter at the end of this post! 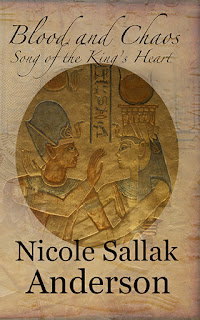 The second chapter of Lord Ankhwenefer’s story is one of love, betrayal, and death. The world needs to know this forgotten king’s tale so that the ghosts of the past may finally rest.

Prince Ankhmakis has left his beloved Natasa for war and treacherous obstacles block his path to becoming Egypt’s last native king. He is the warrior that the men revere, and his orders are followed without question. He is strong and powerful with Natasa on his side, and the fear that breeds in those around him is more dangerous to Ankhmakis than the swords of the Greeks.

Natasa has risen higher in the mystic arts than any priestess before her—and she is in more peril because of it. All she desires is to assist her lover, Ankhmakis, in his quest to take back Egypt from the Macedonians once and for all, but his jealous queen, his plotting brother, and the truest evil in the world want nothing more than to be rid of her.

Natasa and Ankhmakis fight not only against the Greeks but also those at court who will do anything to see them both dead. Together, Ankhmakis would become a great general and Natasa the mystic healer who saves him. Apart, they may not survive.

The prince of Behdet gazed across the Nile River at the city of Panopolis, its bonfires flickering like beacons in the dark night. A hot wind caressed his sunburnt face. He turned to see his enemy’s army spread out before him, torchlights zigzagging across an island downriver like ants on honey, protecting their city with their mighty arsenal of archers ships. He wanted control of the island, needed it, if he were ever to return home to his lover’s arms.

“This war is taking too long,” he hissed under his breath.

“My lord,” Min, his personal guard, answered. “It has been a year. It took our greatest ancestor, Pharaoh Amhose I, nineteen years to banish the Hyksos filth from our lands. Prior to his victory, his father and grandfather also battled for independence. Their line of kings fought for over thirty years to take Egypt unto back unto native hands. Our war is young. Be patient.”

Ankhmakis turned to his friend and captain, his lips curled. “I don’t want this to take three generations, Min. I will not leave this task to my heirs. I will march upon Alexandria and kill Ptolemy IV with my own hands. We should at least be to Memphis by now. Instead we’re in Panopolis, held back by their army. For the second time, the Inundation is at our backs. If we don’t hurry, we’ll be trapped here when the river floods. Such a failure can’t happen again.”

Nicole Sallak Anderson is Computer Science graduate from Purdue University, and former CTO for a small Silicon Valley startup, turned novelist, speaker, and blogger, focusing on the intersection of technology and consciousness. Her essays range from AI and Zen to direct democracy to the loneliness of modern parenting (https://medium.com/@NSallakAnderson/pretty-birds-in-pretty-cages-could-the-nuclear-family-be-the-reason-were-all-miserable-46126d573263) — featured as a top twenty story on Medium. In addition, her work on Universal Basic Income has been included on 2020 presidential candidate, Andrew Yang’s, website: https://www.yang2020.com/policies/the-freedom-dividend/.

Her latest project, The Song of the King’s Heart Trilogy, is a series about the last native Pharaoh of Ancient Egypt and his quest to take back his ancestral kingdom from the Ptolemaic Empire. The first two installments, Origins and Blood and Chaos, are available on Amazon. The last novel in the series, Civilization’s End, will be released October 2021. You can keep up with all her latest writing on her website nicolesallakanderson.com or by following @NSallakAnderson on Facebook (https://www.facebook.com/NSallakAnderson/) , Twitter (https://twitter.com/NSallakAnderson), Instagram (https://www.instagram.com/nsallakanderson/)  and Medium (https://nsallakanderson.medium.com/). Feel free to contact her, she almost always answers to any query or comment!

What is something you’ve lied about? When I was in the third grade, I told everyone that the Brady Bunch was coming over for dinner. No one believed me, but I kept insisting anyway. For like a week.

Who is the last person you hugged? My husband.

What are you reading now? The Divine Secrets of the Ya-Ya Sisterhood.

How do you come up with the titles to your books? This is tricky. Sometimes it’s natural. That’s the way it was for The Song of the King’s Heart trilogy. “The Song of the King’s Heart” was a title found on the tomb of a small, royal child in Egypt. Origins made sense for the first book, because it was the origin of the tale. Blood and Chaos is a suitable name for a story about war. Civilization’s End worked the story of the last native king, for after his death, Egypt as we fantasize about it faded away, falling to Rome a mere century later. However, finding a name for my current work in progress has been harder. I like the title to have meaning in the story, but also perhaps play on it a bit.

Share your dream cast for your book. This is every writer’s fantasy…I’d love for The Song of the King’s Heart trilogy to be a series on Prime or Netflix, one season for each book. I think Zendaya would be perfect as Natasa. She’s beautiful, young, and carries herself like a royal priestess. I’ll be honest, I often dreamed of Chadwick Boseman as Ankhmakis while writing and was so heartbroken when he died. Way too young to lose such a fine person. Only a man with such poise and beauty could be Ankhmakis, the last native pharaoh of Egypt. Mahershala Ali would make a convincing Hugronaphor. Lupita Nyong'o is a goddess and only a goddess can play the High Priestess Neferu-Ankh-Maat. Michael B. Jordan has a way about him that fits Chanax. Daniel Kaluuya might be young, but he’s strong and powerful like General Khaleme. Finnian is hardest to cast. He’d need to be a young actor, blond with big, gorgeous, blue eyes. It’s all about the pale eyes and long, golden hair. He is the opposite of Ankhmakis. He is Apollo and Ankhmakis is Osiris.