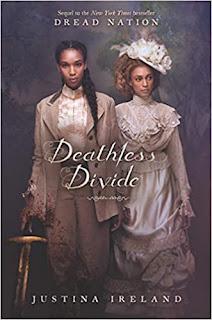 The Civil War has been called… on account of the dead! Ever since the dead first began to rise from the fields of Gettysburg, nothing has been the same. But sadly, some things do remain the same. Slavery may be illegal, but blacks and Indians are still downtrodden, second-class citizens, and they’re being thrown into the front lines to combat the dead menace.

Jane McKeene and Katherine Devereaux have been trained at the renowned Miss Preston’s School for Combat in Baltimore. But Jane’s impulsive and rash nature in regards to a certain young man named Jackson see them shipped out West to a supposed haven from the dead by the name of Summerland. Unfortunately, this is not the paradise it was intended to be. Things go from bad to worse, and the girls and their friends escape and head out to nearby Nicodemus.

As they travel, Jackson suddenly tries to dissuade them from going to Nicodemus, which makes no sense to Jane, but the stubborn boy refuses to talk… until he does, and what he tells her well nigh breaks her heart. No wonder he didn’t want to let her know the truth. Why did she ever trust him to begin  with?

The road to Nicodemus is not an easy one, and along the way, they lose someone they care about. When they finally reach Nicodemus they learn that Daniel Redfern is the mayor—how crazy is that?—and a number of refugees from Summerland are here as well. Which begs the question how long before this town run by blacks will be in the hands of the whites? And what can be done to combat that?

Quick thinking by Jane allows Katherine to pass as white, and she is sent to the nicer part of town, while the other girls end up bedding down in the local brothel, run by the Duchess. Jane is not surprised to see Gideon here, but is surprised to learn he’s made this a base of operations for some time. And he’s still hot on vaccinating anybody and everybody he can. Thanks to a terrible error of judgment on Gideon’s part, Nicodemus is overrun by the dead, who have become surely more savvy than before,  and while trying to escape, the unthinkable happens when Jane is bitten.

The second volume of the Dread Nation duology is written in two perspectives, both Jane’s and Katherine’s, where the first book was all in Jane’s voice. That becomes necessary when the friends are separated, beginning their own journeys.

I enjoyed hearing Katherine’s voice and learn more about her in her own words. She and Jane are so different from one another, but perhaps therein lies the attraction. Difficult times bring out the best and the worst in people, and that is very obvious in this book, as it was in the first. As abhorrent as the people of Summerland were, the people of Nicodemus are every bit as horrible with a few exceptions. And, as usual, Jane keeps putting herself behind the eight ball, so to speak, because that is how she is—strong-minded, and unwilling to let an injustice go unpunished. Even so, something happens which changes Jane, not necessarily for the better, and it will take everything these two girls possess to overcome this divide that has grown between them.

The second book is every bit as good as the first, and although there are no signs of a third book, the ending leaves that open to change, at least in my eyes. There is also a side book I intend to read, Three For the Road.

If you enjoyed Dread Nation, you are sure to love Deathless Divide. Looking forward to reading more from this author.