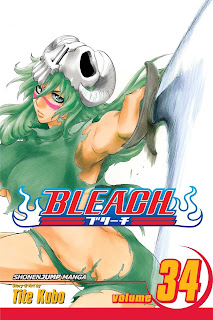 Nel’s transformation has taken Ichigo and everyone else by surprise as she goes from young child to voluptuous fighting woman in a heartbeat! Pesche and Dondochakka also turn out to be more than they seem. Indeed they are true friends and loyal followers and protectors of Nel. As Nel battles Nnoitora, in her Capricorn Knight form, you can almost feel the fear that radiates from him. Apparently he hasn’t missed her presence ever since she almost beat him down once before.

Pesche and Dondochakka attack Szayelaporro, who has vastly underestimated them, not knowing they have been training for years. After Nnoitora unexpectedly causes Nel to revert to her childlike state, he tells Tesla to do what he wants with all of them, he is done. Now Ichigo must face the Armored Tusk Warrior, and Ichigo is in bad shape already.

Szayelaporro deals with Nel’s two friends and is about to put an end to Ichigo when salvation unexpectedly arrives in the form of Kenpachi. A confused Ichigo asks how can he be there, since the captains have been forbidden to help him. Kenpachi explains that it has to do with Uruhara, who was working to stabilize a safe path to Hueco Mundo for the captains, but that Orihime being snatched forced them to speed up the timetable.

The other captains begin to arrive – Unohana, Byakuya, and Kurotsuchi. They are faced by Zommari Rureaux, the number seven Espada

Another action-packed, battle-filled volume of Bleach. Watching Nel and her friends reveal their true selves is pretty awesome. Also, the fortuitous arrival of Kenpachi to save the day! Not exactly an altruistic fellow, I imagine he’s saving Ichigo so he will have the pleasure of battling him again. Look for a brief appearance by Yuchiro as well! Byakuya shows why he has the reputation he has with some pretty awesome moves against Rureaux, and also reveals he is not entirely cold-hearted. But, in my opinion, it is the under-utilized Kurotsuchi who steals the show. We don’t get to see him fight very often, but don’t underestimate him. He takes advantage of a bacteria he planted in the unknowing Uryu in order to gain advance information on the enemy, and that move certainly pays off. Not only does he display his devious skill set but he reaffirms what a cold being he is. His coup de grace against Szayelaporro is priceless!

Hopefully we’ll get to see more of the captains in the next volume, especially Shunsui! I enjoyed this volume of Bleach, look forward to the next one!