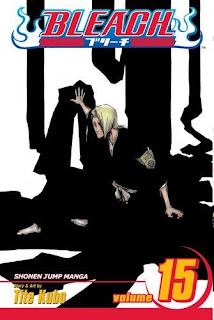 Ishida is facing down the Captain of the 12th Company, Mayuri Kurotsuchi, and is doing very well for himself, despite Kurotsuchi’s immense spiritual pressure and his paralyzing tactics. The captain is so impressed he decides not to kill Ishida, so that he can capture and study him. But Ishida will have none of that, especially after learning the part the Soul Reaper played in the death of his beloved Grandfather. He calls upon a power that amazes Kurotsuchi, who warns him of the devastating side effect of such a move. Will Ishida throw caution to the wind in order to avenge his mentor?

Meanwhile, Yoruichi is determined to teach Ichigo what often takes soul reapers ten years to master—namely, how to bankai—in only three days! In order to do this, she manifests Zangetsu in his physical form and Ichigo must defeat him. But that’s easier said than done, as Ichigo finds himself surrounded by a number of swords and must choose the right one in order to cut Zangetsu down!
Renji, Kira, and Hinamoi are being held in cells until they find themselves unexpectedly released by one of the captains! Meanwhile, a baffled ishida awakens to find himself in the Soul Reaper infirmary, along with Ganju and Chad. Chad feels that all they can do is to stay there and heal and wait for Ichigo to come for them, which he is confident Ichigo will do. Orihime, who was rescued against her will by a random member of the 11th Company, finds herself with members of the 12th Company, namely Yachiru, Kenpachi, Ikkaku, and Yumichika. Kenpachi decides to watch over the girl, confident that where she is, there will Ichigo end up, and he wants to have another battle with Ichigo!

Matsumoto is with Captain Hitsugaya, after she fell asleep in his office, when he learns of the prisoner escape. He knows just where to go, and hopes to arrive there before Hinamori. He knows she blames Gin for Captain Aizen’s death and is determined to avenge him! In the meantime, taking a break from his bankai traning, Ichigo learns some things about Uruhara that he never knew before!
We see more of Ishida than we ever have before, including some backstory, and the last Quincy really shines. If you ever wonder what he’s doing with the others, this volume shows that he definitely belongs among their company. He may be irritating at times, and often insufferable, but he is more talented that I gave him credit for, and loyal to a fault. When he has a difficult decision to make, he doesn’t hesitate to do what’s best for everyone, whether or not it’s best for him personally.

Ichigo’s bankai training is absolutely essential to his growth and development. It’s imperative that he master it, as will become even more evident as the story continues. Watching him train with Zangetsu is great. Ichigo pushes himself constantly, doesn’t know the meaning of defeat, and would never give up. He still has a lot to learn, but he’s definitely on his way to bigger and better things.

The untold story at the end concerns Renji, Kira, and Hinamori as young soul reapers who encounter something beyond their skill level while on a training mission and who decide to handle it as best they can.

Knowing what’s coming, since I already watched the anime, allows me to look for things I missed in that, or things that were missing. It also keeps me from missing the anime too much, since I am revisiting everything. I’ve also started to watch the movies. There is no such thing as boredom when you’re reading these books! Can’t wait to read the next one!