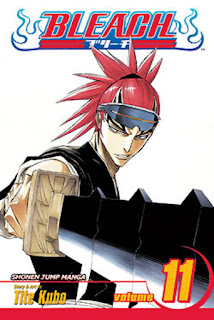 Ganju is still running from the beauty-obsessed Yumichika as Ichigo deals with Ikkaku. Having defeated him, Ichigo waits for him to awaken so he can question him. Ikkaku is surprised to find himself alive. All Ichigo wants to know is where Rukia is, which makes Ikkaku laugh. But he tells Ichigo where to find her, although he doesn’t have a chance of succeeding. Especially if he runsinto Ikkaku’
Speaking of which, that same captain is on the trail of Ishida and Orihime. But his directional skills are faulty, as are those of the small lieutenant who rides on his shoulder, and they escape detection. Ganju has exhausted himself running from Yumichika, who savors his impending victory just as they hear a voice screaming for Ganju and realize it’s Ichigo. Ganju points out that if Ichigo is there, he must have defeated Ikkaku, which Yumichika claims is impossible. Ganju manages a few slick maneuvers, finally drawing Ichigo’s attention.

Ishida and Orihime find themselves facing Jidanbo’s brother, Jirobo. He seems to be targeting Orihime, for some reason. Ishida shows how much he has progressed during his recent training.

After leaving Yumichika, Ganju finds himself running once more, chased by a number of soul reapers. Hearing Ichigo’s voice, he thinks everything will be fine now, only to discover that Ichigo is also being chased by a pack of soul reapers and they’re headed right toward Ganju! Can this end well?

Things are really getting exciting in this volume of Bleach. Ichigo is determined to rescue Rukia, no matter who gets in his way. He has that mindset that predetermines that he will succeed and that failure is not an option. Watching him fight the various members of the Thirteen Court Guard Squads is epic! Also, it’s fun to be introduced to characters who will turn out to be very crucial to the story, ones we will come to know and love. I’ve learned, from watching the anime, that first impressions don’t always count, and that the people you think you hate and/or despise often become favorites with time. Similarly, not everyone you like will stay liked, and that’s all I’ll say for now lol

I love the dynamics between the members of the squads as well. They are not all friends just because they work together, as evidenced by Kenpachi and Kurotsuchi. Yes, Kurotsuchi is very odd, you have no idea how odd yet, but there is also something about him that I like. Ditto with Kenpachi and Yachiru. Ichigo is growing and developing all the time, as a person and as a soul reaper.

Renji Abarai has already grown on me, and the glimpse of his backstory with Rukia is priceless.

Another great volume, can’t wait for the next one!