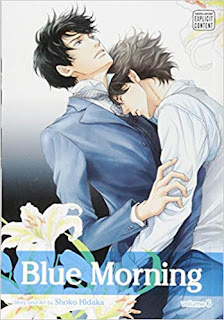 Katsuragi has become uncertain, both of himself and his relation with Akihito. He thinks himself weak and useless because Akihito no longer blindly obeys him—so what purpose does he serve? While dressing the morning after, at Akihito’s hotel, he notices ragged garments in the closet and wonders why they are there. And why won’t Akihito get the haircut Katsuragi keeps telling him he needs?

Akihito meets with Ishizaki at a hot pot restaurant, which irks Ishizaki because it’s a hot day. Akihito says he is about to retire to Kamakura, under the pretense of his fake illness. Much has changed since the evening at the Moriyama’s, and thanks to the reporters Katsuragi arranged for, is common knowledge. For example that Ishizaki has become the Kuze house guardian. Madam Kayoko’s trip to France and her estrangement from her husband. Akihito’s “lung illness.” One reporter asked Akihito about the importance of producing an heir, but that won’t happen, not while he has Katsuragi. Ishizaki muses that things would be easier if Katsuragi were a woman.

Master Ishizaki informs Katsuragi that he has purchased a mill and wishes him to become the president and make a profit. He accepts the position. When he tries to drop off some papers with Amamiya, the new Kuze butler insists he deliver it to Akihito himself, and also deliver something from Katsuragi’s brother, Takayuki, who Akihito has entrusted with the financial affairs of the Kuze house. Katsuragi goes to the hotel and wakes Akihito, informing him the government railways have finally given their approval. Now Akihito can set up a railway in the old fief.

Ishizaki returns home from a late night out to find Katsuragi in his room. Katsuragi tells Ishizaki to not see the geisha he’s been seeing, and if he must continue the relationship, then he must allow Katsuragi to buy her out of bondage in his own name. Akihito meets with Katsuragi’s brother, who also remonstrates with him about his unruly hair. Akihito reiterates that he will be leaving for Kamakura, as planned. When Akihito says that he wishes Tomoyuki and Takayuki, as brothers, were closer, Takayuki responds with the comment that they are not related by blood, to which Akihito enigmatically replies, “Do you really think so?”

Katsuragi calls on Saionji and catches up with him. It seems his former lover knows him pretty well, including the fact that he loves Akihito. Saionji is happy himself, with his wife and new baby. Saionji gives Katsuragi some advice on what he should do. Later, Katsuragi goes to the mill. His employees are apprehensive about what their new boss will be like, fearful they will be blamed for past failures and be let go, but Katsuragi is not what they expected.

Even as Akihito makes plans to study abroad, he is concerned with Katsuragi, knowing he wishes to know about his origins, whether he voices his desire or not. Akihito and Amamiya visit Kiku’s old house, and Amamiya wonders what might have been, know that he knows about Akihito and Katsuragi. Akihito confides his plans for the future, once the railway is in place. Despite what Katsuragi may think, he does have the best interests of the Kuze house in mind, as well as his future with Katsuragi. Will he be able to persuade Katsuragi to come with him to Kamakura?

Each volume of this series is wonderful, I can’t get enough of these characters, even as I am left on the edge of my seat, wondering when they will finally be in sync with one another. The only way I will be happy is if they end up together at the end, nothing less will do. The artwork is superb, both men are very handsome, especially Katsuragi. She is very expressive in portraying their emotions in their faces. I can see the lust that glazes Katsuragi’s eyes, feel Akihito’s own wonder and joy as he gazes at the man he loves during their intimate moments. As to who will end up with the house of Kuze, I would not venture a guess. There is a whole lot going on, and the plot just keeps on getting deeper.

Can’t wait for the next one, one of the best yaoi manga ever!