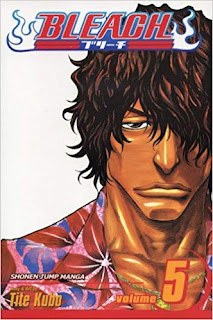 When Ichigo first encounters the Quincy, Uryu Ishida, the oblivious Ichigo is totally unaware that Ishida is in his class. In fact, he’s top of the class. But not only is Ishida aware of Ichigo, he knows that the substitute soul reaper is following him home. Ishida challenges Ichigo to a game to decide who is superior—a Quincy or a Soul Reaper. Meanwhile, Rukia has gone to see the shady shopkeeper, Kiskue, to see if he knows anything about a Quincy.

Ishida proposes to draw Hollows to the area and then see who can kill the most, but Ichigo is against this idea, as it will put the people of Karakura in danger. But it’s too late, the heedless Ishida has already dispersed the Hollow bait and they are beginning to converge. Then Ishida drops another bombshell—Hollows are drawn to anyone with any spiritual energy. As Ichigo races toward his home, Ishida thinks they aren’t the only ones close to Ichigo who possess spiritual gifts.

Ichigo sends Kon to retrieve the phone from Rukia, who is still at Uruhara’s store. She suddenly starts to receive Hollow reports, but they end almost as soon as they begin. What’s going on here?  When her phone begins to blow up, she realizes something sinister is going on.

Meanwhile, Chad senses something shimmering and he knows it isn’t good, so he tells his friends to run before he punches it.  He decides to lead the thing, whatever it is, to a vacant lot where he can fight without hurting innocent bystanders. There he encounters Ichigo’s sister, Karin, who is practicing soccer. Oddly, she seems to be able to see the creature that is following Chad, although her teammates cannot. She yells at them to go away. Maybe, if she and Chad team up, they can do something about this creature.

Chizuru and Tatsuki constantly vie for Orihime’s attention, and Chizuru makes no bones about her attraction to her. Suddenly Orihime announces she wants to hurry home to watch a TV show, but the truth is she’s seen something on top of the school building and is trying to get her friends to safety. This doesn’t work, to her dismay, and she finds herself facing the strange creature. But she is about to discover powers she was unaware she possessed.

In this volume of Bleach, we are getting a better grasp of who’s who in this world, and their growing importance to Ichigo and the story. Bleach is full of hilarious moments, and this volume is no exception. I love Kubo’s sense of humor, as well as the diversity of his characters. There is a lot of action as the people Ichigo cares about find themselves in peril. Although I do prefer watching the action scenes in the anime, they are still fund to look at in the books.

Another great volume, looking forward to more of the same.