Good morning! Please welcome author Carolyn Arnold to Full Moon Dreaming! She is here to tell us about her Brandon Fisher FBI series. Carolyn will be awarding a paperback copy of Remnants to one randomly drawn commenter during her tour via Rafflecopter. The more you comment, the better your chances of winning. To find the other stops on her tour, go here. Don't forget to look for the Rafflecopter at the end of this post! 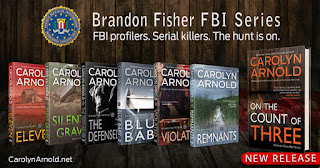 Profilers. Serial killers. The hunt is on. Do serial killers and the FBI fascinate you? Do you like getting inside the minds of killers, love being creeped out, sleeping with your eyes open, and feeling like you’re involved in murder investigations? Then join FBI agent and profiler Brandon Fisher and his team with the Behavioral Analysis Unit in their hunt for serial killers.

This is the perfect book series for fans of JT Ellison, Catherine Coulter, Allison Brennan, and Blake Pierce. This series is also bound to entertain those who enjoy Criminal Minds, NCIS, Silence of the Lambs, Seven, Dexter, Luther, and True Crime.

Read in any order or follow the series from the beginning: Eleven, Silent Graves, The Defenseless, Blue Baby, Violated, Remnants, On the Count of Three.

She is an international bestselling and award-winning author, as well as a speaker, teacher, and inspirational mentor. She has four continuing fiction series and has written nearly thirty books. Both her female detective and FBI profiler series have been praised by those in law enforcement as being accurate and entertaining, leading her to adopt the trademark, POLICE PROCEDURALS RESPECTED BY LAW ENFORCEMENT™.

Today, she answers a few questions for us and gives us insight into her life and journey as a mystery author.

Have you ever been on a manhunt or at the scene where a dead body was found?

I took part in my local police department’s Citizen’s Academy. As part of this, I received an inside look at seventeen divisions over a ten-week period. As an added benefit, each student was afforded a ride-along. And mine… Well, I went on the perfect one for a crime writer.

My ride-along actually started out with a manhunt. I experienced the excitement of wanting to find the guy and found myself scrutinizing every male I spotted in the area just to make sure he wasn’t the one we were after. Unfortunately, the search moved to the downtown area from the eastern end of the city where the hunt had begun, and the sergeant signed off the investigation. By the end of my ride-along, about five hours later, the man still hadn’t been found.

After the sergeant left the investigation, he turned to me as he was driving and asked if I had ever seen a dead body. I told him I had at memorials and funerals and then asked why. I soon found out that our next stop involved one.

I figured I’d catch a glimpse of the deceased under a tarp or being wheeled away, but I got far more than that. I received a front-row seat to a death investigation. For hours, the sergeant and I were mere feet away from the body. I witnessed firsthand how it changed color over time, but I also found that I went into detective-mode. The forensic identification unit—essentially CSIs—was called in and arrived with collection kits. The team members gloved up, snapped photographs, took fingerprints from the deceased, and more.

The entire time that I was on scene, I noticed myself going into a detached state—the result of adrenaline. Later that evening, it began to sink in that I had spent hours with a dead body, and I was nauseated. As more time passed, I became weepy as it sank in that the deceased had been a husband, a father, a lover, a friend…a person. That night I dreamed about the man. It wasn’t a nightmare, but I was an officer trying to figure out what had happened to him.

I couldn’t imagine returning to the field the next day and having a similar experience or witnessing something even worse, like a violent murder scene or that of a fatal car accident.

What do members of law enforcement say about your books?

Many testimonials attest that I am pleasing readers in law enforcement. They love that my mysteries are accurate in that regard, and they view that alone as a sign of my respect for them.

Here are a few testimonials that I have received on Eleven (Brandon Fisher FBI series):

“I spent thirty-eight years with a major police department in Missouri, fifteen of which were in the homicide section. I also had numerous dealings with the FBI throughout my career, mostly bank robbery, interstate shipment thefts, and a few kidnappings. Eleven kept my interest piqued throughout… Loved it.”
–Richard Bartram, Sergeant (retired), St. Louis Metropolitan Police Department, St. Louis, MO

“I am a forty-year veteran of police work. All local, no Fed. Eleven was a great read. All the descriptors and nomenclature were spot on.”
–Joe Danna, Police Officer, Katy Independent School District Police Department, Katy, TX

“A great police procedural! … Full of twists and turns. The characters are well-developed and a mix of interesting personalities. … Holds your interest to the end!”
–Mark Davis, FBI Special Agent (retired), Washington, DC

What did you do before you became a bestselling author?

For a living, I worked in accounts receivable for a few different companies collecting from businesses. Yet, despite working full time, in 2006 I was reunited with writing. I wrote every chance I got—before work, on lunch breaks, after work, on the weekends. I became so focused on writing and the publishing world that hardly a day went by without them being a part of my life, and since the summer of 2014, I’ve been a full-time author.

How do you know so much about what criminals think?

I can’t answer that without incriminating myself… Just kidding.

Everyone has what we call a “dark side.” In writing these books, I suppose you could say I tap into this side of my psyche. Whatever I can scheme up is possible, and I write that which scares and excites me.

When did you know that you had hit the big time with your books?

When I got to say good-bye to my day job! Even before I fully resigned, I had cut back a five-day a week job to four days, then to three. It got to the point, though, that I loathed going in for that many days, and I knew it was time to make the move and become a full-time author. That was in the summer of 2014. Since then, I incorporated my own publishing company in the summer of 2015, and, at the start of 2016, my husband joined me there full time.

And don’t forget to sign up for her newsletter for up-to-date information on release and special offers at http://carolynarnold.net/newsletters. 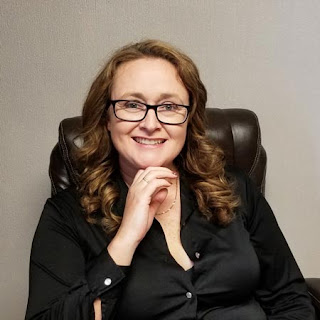 CAROLYN ARNOLD is an international bestselling and award-winning author, as well as a speaker, teacher, and inspirational mentor. She has four continuing fiction series—Detective Madison Knight, Brandon Fisher FBI, McKinley Mysteries, and Matthew Connor Adventures—and has written nearly thirty books. Her genre diversity offers her readers everything from cozy to hard-boiled mysteries, and thrillers to action adventures.

Both her female detective and FBI profiler series have been praised by those in law enforcement as being accurate and entertaining, leading her to adopt the trademark: POLICE PROCEDURALS RESPECTED BY LAW ENFORCEMENT™.

Carolyn was born in a small town and enjoys spending time outdoors, but she also loves the lights of a big city. Grounded by her roots and lifted by her dreams, her overactive imagination insists that she tell her stories. Her intention is to touch the hearts of millions with her books, to entertain, inspire, and empower.

She currently lives in London, Ontario, with her husband and beagle and is a member of Crime Writers of Canada and Sisters in Crime.

And don’t forget to sign up for her newsletter for up-to-date information on release and special offers at http://carolynarnold.net/newsletters