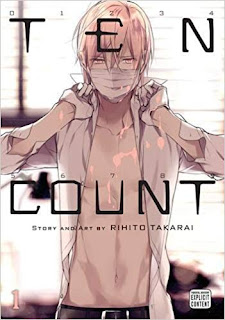 Shirotani believes that the whole world is dirty and contaminated. Handling certain objects is difficult for him, at best. Even so, he considers his beliefs to be his problem and no one else’s. But perhaps it’s time to readjust his thinking when he finds himself the cause of his employer being injured in an accident. Through the accident, Shirotani meets Kurose, who makes some very astute observations regarding Shirotani’s idiosyncracies. How does Kurose know? Kurose suggests Shirotani see a counselor and gives him a card, which Shirotani surprisingly keeps.

Not sure why, Shirotani finds himself in front of the address on the card. As he’s standing there, Kurose rides up on his bicycle. It turns out he’s a counselor at the center. He’s glad to see Shirotani there. But when Shirotani attempts to bolt, Kurose suggests that perhaps the two of them can meet, outside of the center, so he can help Shirotani. They end up meeting at a restaurant where they discuss Shirotani’s problem and some of the limits of what he can and cannot do. Kurose has him make out a list of ten actions or activities Shirotani has an aversion to, with number one being the one with the least aversion and so on. Shirotani leaves the number ten spot open, and Kurose says he can fill it in later. By the time he completes everything on the list, Kurose declares, Shirotani will be cured! Kurose assures Shirotani he need never come to the clinic. When he asks about a consulting fee, Kurose says there will be none, as he’s doing it on his own time. When Shirotani asks why he would do that, he’s surprised at Kurose’s answer—he wants to be Shirotani’s friend!

And so they begin with the first item on Shirotani’s list—to touch a door knob bare-handed.

I think the premise for this yaoi series is very unique. I’ve never seen anything quite like it. I like the way it handles Shirotani’s compulsions, never making light of them. Kurose is a thorough professional and very understanding. When Shirotani is late, Kurose usually knows why that is, what he’s gone through just to get there. But I think he also realizes he has feelings for Shirotani that he isn’t about to reveal or burden him with while they are in this current relationship of counselor and counselee. Of course I’m hoping that Shirotani and Kurose will become a couple, and I’m hoping that the tenth unrevealed item on Shirotani’s list is to be able to fall in love, and that he will do so with Kurose. Time will tell. There are five more volumes to go, looking forward to reading them.