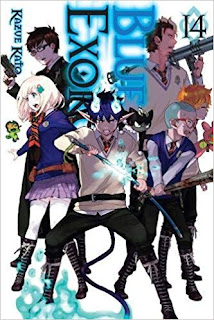 While attempting to rescue Izumo from the clutches of the Illumunati madman, Professor Gedoiin, the exwires find themselves not only separated from one another but facing zombies! One by one they defeat their foes and assemble as a group  once more, only to face Gedoiin. Gedoiin reasons that it’s only right for humans to experiment on humans, as they’ve experimented on animals for a long time. Just then her captors bring out Izumo. Ren goes into action and finds himself facing off with Shima! Rejecting the help of the exwires, Izumo agrees to take the Nine Tails inside herself. Can they stop the Nine tails without hurting its vessel, Izumo?

This volume of Blue Exorcist is not as Ren-centric as others. It showcases the exwires more as a team. We get a glimpse of Suguro and what he was like before he became his current buff and strong self. And Izumo sees another side of her otherwise weak and selfish mother. Professor Gedoiin is one of the creepiest villains we’ve encountered so far, and he doesn’t get any better in this volume. I’m still not entirely sure that Shima is the traitor he seems to be, either.

To be honest, I’m not sure what purpose would be served by implanting the Nine Tails in Izumo, but I’m looking forward to seeing where the story goes now. Another good volume, can’t wait for more!