Please welcome author J.A. Jackson, who is here to tell us about her new release, Revenge. J.A. is awarding a $25 Amazon/BN GC to one randomly drawn commenter via Rafflecopter. The more you comment, the better your chances of winning. To find the other stops on her tour, go here. Don't forget to look for the Rafflecopter at the end of this post! 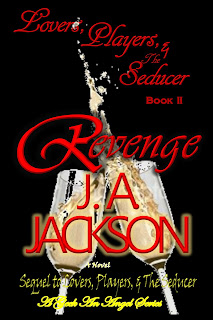 Back then, Nicholas La Cour played a very dangerous game of cat and mouse; one in which he involved his childhood friends, Kienan Egan and Quinn Rolandis. Even worse, he put his own sister, Lacey La Cour, right in the middle of that storm.

Everyone got swept away in the torrent of greed, lust and ruthless ambition. All except two ratchet lovers…

Another storm is coming, but the two ratchet lovers survive it? Find out in Jackson’s anticipated sequel, Lovers, Players The Seducer, Book II The Revenge Game. Winner takes all.

A half hour later Maëlle squatted at a swarm of mosquitoes and shifted the fishing pole case from one shoulder to the other.  The bag was light and didn’t smell as bad or feel as slimy as the dead fish Paul and Bruno were carrying. She turned and headed between the trees that laid just behind the cabin.

Maëlle stopped abruptly and Paul almost ran into her.

“What’s wrong Maëlle? Why did you stop?”

Paul’s eyes followed hers and noticed the Mercedes parked in the driveway.

Bruno quickly caught up with them. “Looks like we have company. Were you two expecting company?”
“No,” Paul and Maëlle said together.

“Well, that’s an awfully expensive car. Whoever it is has a few dollars to rub together,” Bruno said.

Bruno took the lead. “Come on, you two, let’s go over and say howdy,” he said, carrying a load of fish. “Maybe the sight of all these dead fish will frighten them away.”

Paul playfully gave Maëlle’s shoulder a nudge as they walked over together.

All at once Bruno yelled.  “Good evening, you in the car. Can I help you?”

“Hamelin?” Bruno laughed out. “Boy, I haven’t seen you in ages.”

For a moment Maëlle could have sworn she saw a flash of something pass across Paul’s face.  She didn’t have long to ponder it as Hamelin closed the distance between them. 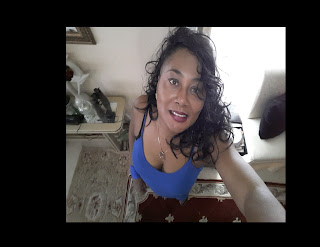 J.A. Jackson is the pseudonym for an author, who loves to write deliciously sultry adult romantic, suspenseful, entertaining novels with a unique twist. She lives in an enchanted little house she calls home in the Northern California foothills.
She spent over ten years working in the non-profit sector where she wrote grants, press releases and contributed many stories to their newsletter. She was their Newsletter editor for over ten years. She loves growing roses, a good pot of hot tea, chocolate, magical stories, suspense stories, ghost stories, and reading Jane Austen again and again in her past time.