Please welcome my dear dear friend and fellow author Chris T Kat, who is celebrating the release of her new book, Stained! 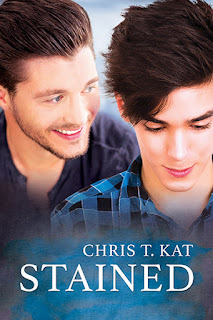 Release Date: June 1st, 2016
Blurb:
Blair Clark has reached his breaking point. Forced to leave one job because of sexual harassment, he’s having difficulty finding another. Since no one believes what happened, Blair’s left with a stain on his employment record that he can’t get rid of. He’s had to move back home with his mother. As if that’s not bad enough, he realizes his crush, Travis, is simply using him. His romantic life looks as hopeless as his job search.

Jack Ross is sure he’ll never find anyone who’ll love him for who he is. All anyone sees is the port-wine stain on his left cheek—not the man behind it. Even his mother thinks he should get rid of it. But the procedure is difficult and painful.

When Blair applies for a secretarial position with Jack’s firm, both men learn that beauty is, indeed, in the eye of the beholder. It’ll take a lot of trust to chase away their insecurities, but if they take a chance on one another, love will find a way.

Excerpt:
From Chapter One

“Can’t I?” I gazed into Travis’s brown eyes, the same eyes I dreamed about at night. In those dreams they were filled with love, but when I looked now, I only saw cruelty, arrogance, and something more, something darker I didn’t want to think about.
“No.” Travis snatched my chin, held it tightly between his big fingers and forced me to keep perfectly still. “No, you can’t. Choose a manly job and they’ll stop. Keep flaunting your sexuality and that’s what they’ll do.”
“Flaunting my sexuality? What’s that got to do with my job?”
“You’re a secretary, for fuck’s sake. It’s a woman’s job. Now stop adding fuel to the fire and cowboy up.” Travis’s voice remained low but it held an angry edge to it, one I recognized well.
I dropped my gaze, and a moment later Travis let go of my chin. Breathing out a sigh of relief, I winced when another guy asked, “Having trouble keeping the fairy in line?”
“Are you kidding?” Travis replied, puffing up his chest.
Enough was enough. I bolted up, ready to leave, when a big hand clamped on my arm. I tugged, but the grip tightened. Anxiety blossomed into fear, especially when the table dropped into sudden silence.
“Where do you think you’re going?” Travis hissed.
My tongue stuck to the roof of my mouth, making it impossible for me to answer. What the hell was wrong with me? Why had I pursued Travis for so many months? Just because of his looks? Sure, he was hot, and exactly how I liked my men—big, fair-haired, and brown-eyed. But there was no love lost between us. Travis would never come out as gay, even though he liked to fool around with me whenever it was convenient for him.
“Blair, sit your ass down again, you’re attracting attention.”
When Travis pulled at my arm with more force, I planted my feet. I didn’t anticipate Travis letting go all of a sudden, leaving me to stumble backward. I crashed into someone behind me, taking us both to the ground.
Rolling to my knees and away from whomever I’d thrown, I apologized, “I’m so sorry. Did I hurt you?”
Heat flooded my cheeks as embarrassment swept over me. Holding out a hand for the guy I’d tripped, I recoiled when the man sat up, revealing his face. A gasp tumbled over my lips and I stared openmouthed. The skin of the man’s left side was stained in red, giving him a slightly scary appearance, as if he’d been badly burnt.
“I’m fine,” the man said, his brows creasing in a frown. Obviously he’d seen my reaction and wasn’t too thrilled about it.
I couldn’t help but stare even more. The man’s dark blue eyes bore right into me, daring me to say anything. The stained skin drew my attention, no matter how hard I tried to look elsewhere. It looked so painful, a large blotch of red that started below the man’s eye, covered his whole cheek, and tapered out at his jawline.
“It’s not contagious, if that’s what you’re afraid of,” the man said in an icy tone. He rose in one fluid motion, holding out his hand for me to… to what? Help me up? Why would he do that?
I eyed the outstretched hand, hating myself for the fear coursing through me. Just when I was about to take the man up on the offer, two big hands grabbed my waist and hoisted me to my feet. 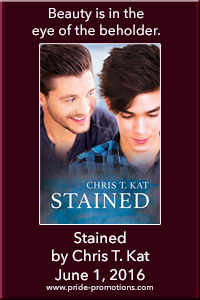 Meet the author:
Chris T. Kat lives in the middle of Europe, where she shares a house with her husband of many years and their two children. She stumbled upon the M/M genre by luck and was swiftly drawn into it. She divides her time between work, her family—which includes chasing after escaping horses and lugging around huge instruments such as a harp—and writing. She enjoys a variety of genres, such as mystery/suspense, paranormal, and romance. If there's any spare time, she happily reads for hours, listens to audiobooks or does cross stitch.

Rafflecopter Prize: 3 winners receive a book from Chris’s backlist!
a Rafflecopter giveaway
Posted by Julie Lynn Hayes at 6:34 AM