Please welcome authors Leslie North and Elizabeth Lennox, here to tell us about their new release, The Sheikh's Desires. They will be awarding a $10 Amazon/BN GC to one randomly drawn commenter via Rafflecopter. The more you comment, the better your chances of winning. To find a list of the other stops on their tour, go here. Don't forget to look for the Rafflecopter at the end of this post! 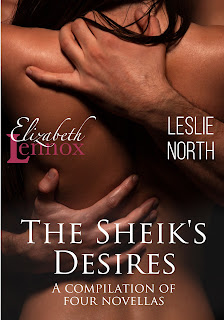 Get four breath-taking sheik romances from two of your favorite authors - all in the same boxset!


The Sheik’s Challenge by Elizabeth Lennox

When she sings, she sounds like a cat in heat…but Ana, a brilliant mathematician, stuns and surprises Najid del Sabur, Sheik of Safir. Her bright eyes defy him and her smiles sooth him, while her body makes him lust for her. But can he catch her? Can he convince her that her past won’t hurt their future?

The Prince’s Challenge by Elizabeth Lennox

She can’t sit still. She’s beaten every nurse and doctor on her floor at cards. And she’s achingly beautiful. But is she friend or foe? Having been caught in the line of fire by a bullet meant for his brother, Prince Jual del Sabur, Minister of Defense for Safir can’t decide if the lovely Sonya was part of the assassination attempt or innocent and just caught by bad timing. All he knows is that he is definitely caught by her startling eyes and her soft sighs as he explores that question.

Ultra-traditional and devastatingly handsome Prince Zafar Tadros thinks a business/sports complex is not what is needed for his country—but he believes in helping his family. With the region increasingly doing more business with Western companies, his father Sheikh Ahmadi has ordered this new business/sports complex to be a mix between West and East cultures.

Zafar has decided he will work to integrate as much traditional elements as possible, but Belle Mooney, an innovative American architect has taken her direction from Zafar's father and is going for innovations. The two clash over designs—and only one can win.

With the deadline fast approaching, playboy Prince Adyan Tadros must supervise the only construction company that will take on the job of building the business/sports center in less than six months. The meticulous Edna Abbey has taken over her father's construction company while he recovers from a stroke, and the last thing she wants to do is rush the project. But with attraction between her and the Prince growing everyday, she may be glad for the distraction...

The Sheik’s Challenge By E. Lennox

Two things hit her all at once.  First, the man was naked!  Well, he had a towel wrapped around his lean waist, but that was it.  He had another towel in his hand that he used to dry his hair, then rubbed it against his chest.  Ana couldn’t do more than stare, fascinated by that hand as it moved the towel over all of those muscles.  They were everywhere, the skin and muscles flexing as he dried himself off.  Was his hand moving more slowly?  Was he…

Her eyes flipped up to his and she blushed when she realized that he was watching her, watching him.  “I’m sorry,” she whispered and licked her dry lips.

Ana felt her breath catch in her throat and her eyes moved down over his body again, her mind spinning out of control at the idea of drying off that man’s chest and arms.  And…everything else.

When she realized what time it was, she looked down, embarrassed to have monopolized the evening so completely.  “I’m sorry.  You’re probably sick of hearing about the escapades of my students.”

“Not at all.  It is refreshing to hear about someone who loves her job.”

She smiled but looked away, unable to hold the intensity of his gaze.  “I’m sure you have other priorities on your time.”

He glanced at his watch.  “I don’t, but you need sleep.  I’ll come get you in the morning for breakfast if that is convenient?”

She shook her head.  “No need,” she told him, standing up and feeling relieved that her muscles held her upright once again.  They would start to wobble soon, but for the moment, she was steady.  She cinched in the tie to the robe, painfully conscious that she had nothing on underneath.  His eyes told her that he was conscious of that fact as well and her whole body heated.

Thankfully, he didn’t mention her lack of clothing, proceeding on as if she were completely dressed.  “There’s every need,” he said and came around the table.  Taking her hand, he kissed her knuckles gently.  “Until tomorrow morning,” he said.  A moment later, he’d disappeared and she was standing there by the table looking at the now-empty doorway.

Sonya had no idea what was going on, why she was here or why he was spending so much time with her.  She suspected he carried a great deal of responsibility on those broad shoulders.  So why was he spending time with her?  Listening to her drone on about her students and helping her to bathe?

She walked over to the large bed, still blushing at the memory of his heated eyes looking at her as she stood in the shower area.  She slipped beneath the sheets and, because he was no longer around and she felt “safe”, her mind wondered about how it might feel to have him touch her with more than just his eyes.

The truth of the matter is she loves her fictional persona, Leslie North, more than her normal, day-to-day persona! Her bestselling books focus on strong characters and particularly women who aren't afraid to challenge an alpha male. Inspired after years of travel, her stories are set all over the world, from the tough streets of Russia to the beautiful beaches of the middle east.

Leslie fell in love with romance when she first picked up a scrappy, dog-eared romance book from her local library. She began writing soon after and the rest, as they say, was history. She now lives in a cozy cottage on the British coast and enjoys taking long walks with her two Dalmatians, George and Fergie.

She LOVES reader feedback, and if you have any comments, don't hesitate to contact her via e-mail: leslie@leslienorthbooks.com.

Although Elizabeth wanted to be a romance novelist since the eighth grade, that dream only became a (paid) reality for her in 2009 and a full time job in 2012. Along the way, she received a BS in History and held different jobs in the real estate, government consulting, and financial industries. All during that time, though, she was always writing, using her personal experiences, dreams, and travels throughout the United States, Europe and the Caribbean as backdrops for her stories. To date, she has written over 80 books and sold over 1.7 million copies. Her free novellas have been downloaded over 2.9 million times since 2013.

Elizabeth lives in Virginia with her husband and two children. Their home is just outside of Washington, D.C., and many of her novels are set in this area.
Book Links
Amazon: http://www.amazon.com/Sheiks-Desires-Boxset-Elizabeth-Lennox-ebook/dp/B01COB1MPE/
Barnes & Noble: http://www.barnesandnoble.com/w/the-sheiks-desires-boxset-elizabeth-lennox/1123496807?ean=2940152837780
Apple: https://itunes.apple.com/us/book/id1090935426
Kobo: https://store.kobobooks.com/en-us/ebook/the-sheik-s-desires-boxset


a Rafflecopter giveaway
Posted by Julie Lynn Hayes at 6:30 AM