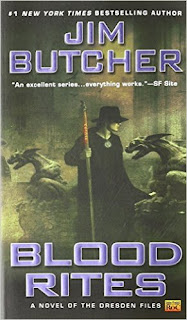 Harry rescues a box of adorable puppies from flying monkey-demons, with the assistance of Thomas, the vampire. Harry knows Thomas too well not to know he must want something in return, despite his thin excuse of needing a ride home. Cause yeah, wealthy vampires often have that problem, right?  Harry’s right, of course. Thomas does want something. He wants Harry to help a friend of his who has a problem that is right up Harry’s alley.

Thomas’ friend thinks someone is trying to kill him. Maybe it’s the couple of mysterious deaths that have already happened around him? Harry agrees to talk to him, and he tells Thomas that if he takes the friend’s case, his price is the truth—he wants to know why Thomas has been helping him. Thomas says Harry won’t believe him, but he agrees to Harry’s terms.

Harry meets with Thomas’ friend, Arturo Genosa, a filmmaker who believes he’s been cursed. Other than by having three ex-wives.  Harry agrees to take the case for his usual fee, but in order to do this, he has to stay close at hand, which means he needs a legitimate reason to be hanging around the film set. Arturo proposes making him a boom operator, until Harry confesses he has a problem with most technology. So Arturo makes Harry a production assistant and Harry agrees to be on the set the next day. Imagine Harry’s surprise when he discovers he’s working on a porn film!

I loved the truth about Thomas, and I also loved seeing another side of Murphy. This is one of my favorite books in the series so far, and I look forward to seeing a lot more of this new development.

Another great addition to the Dresden Files, can’t wait for the next one!