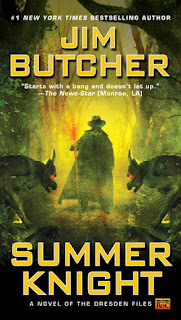 Harry Dresden is in deep doodoo—the fact that it’s raining frogs on him is the least of his problems. His girlfriend Susan Rodriguez, ace reporter for a supernatural rag mag, is on the cusp of becoming a vampire all because of a little altercation Harry had with the Red Court. The White Council is coming to sit in judgment on him, and to say he doesn’t have a lot of friends there would be an understatement. They’re miffed because of Harry’s fiasco with the Red Court and the looming threat of war, which threat can be easily assuaged—if the Council gives up Harry Dresden. Harry has been a bit of a recluse ever since the incident which ruined Susan’s life, but now everyone seems to want him. Queen Mab (yes, that Mab, the Fairy Queen, or one of them) wants to employ Harry, which isn’t exactly on Harry’s bucket list. But circumstances force him to change his mind, and he agrees to her terms. First up, he has to figure out who killed the Summer Knight, and who’s trying to inflame a war between the Summer and Winter Fairy courts.

Harry’s walking a thin line here, things are not looking good, and the odds are certainly stacked against him. All he has on his side is a skull named Bob, and the able assistance of some young werewolves. Will that be enough to save his life, help Susan, and keep the White Council from turning him over to the vamps, not to mention preventing an Armageddon of a war whose possible outcomes include a new Ice Age?

Not to mention there’s the reappearance of someone who by rights shouldn’t be able to reappear,  and who completely throws Harry’s equilibrium out of whack?

I think this may be my favorite Dresden File book yet. Harry begins the book about as low as he can get, out of step with himself and the world around him. He has to draw on those strengths which make him who he is to overcome this slump and figure out how to save the world.

There are some very interesting new creatures in this volume, as well as some familiar friends. It was interesting to watch Harry’s interactions with the White Council, as well as with the various Fairies. This action never stops. If it’s not one thing, it’s another, and Harry doesn’t always come out on top. And yet he perseveres.

I believe by the fourth book, the author has definitely found Harry’s voice, and it’s deep and rich, and quite powerful. The more you write something, at least in theory, the better you get, and so it is here. Much as I enjoyed the first three books, it’s as though the fourth book kicked the character of Harry Dresden into overdrive and took us along for the ride.

This is a can’t-be-missed addition to the series. I look forward to reading more.
Posted by Julie Lynn Hayes at 12:01 AM