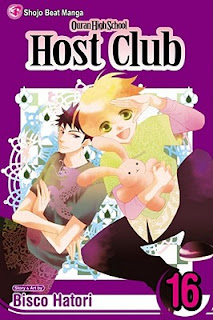 .
The time is rapidly approaching for Hunny and Mori’s graduation, hard as that is to believe. Even more unbelievable is that Mori has challenged Hunny to a duel! What’s up with that?

Ouran High School is abuzz with the news of the impending duel, and bets have even been placed. But no one can predict how the duel indeed ends.

April arrives, and time for the new school year, but the door to Music Room 3 remains locked…

So much is changing, more than friends graduating and moving on. Tamaki has been asked to move into Mansion #1, his longtime dream come true. Or is it a nightmare?

Suddenly Tamaki has no time for club activities. Or anything else that includes the Host Club. Determined to find out what’s going on, the Club approaches Tamaki’s father, to Tamaki’s dismay. Is he lost to them forever?

As a bonus story, we’re given a glimpse into the courtship of Haruhi’s parents.

This volume of Host Club is both wonderful and infuriating. Wonderful because we’re getting closer and closer to everything we’ve waited and hoped for. Infuriating because sometimes you just want to shake someone and tell them to see what’s really going on around them.

Only two more volumes left. I have no doubt that Haruhi and Tamaki will overcome everything and end up together. I hope. Okay, maybe I have a little doubt. And a lot of worry. And what will they have to suffer in the meantime? Let’s just say I’ll be disappointed with anything less than them being together.
Bisco Hatori has made the Host Club very real. I feel like I know the members very well. I love her artwork and her writing style. This series is definitely a classic.

I suspect that in the next two volumes we’ll be able to tie up everything, answer questions, and weave it all together into one soul-satisfying cohesive whole.  After the series is finished, I guess I’ll have to satisfy my desires to visit with the members of the club by writing fanfiction about them.