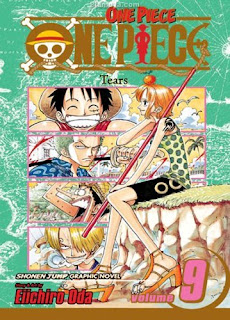 “Sawtooth”Arlong and his pirate gang have held Coco village captive for years, extracting tribute on a yearly basis in exchange for allowing them to live. When foolhardy Usopp challenges that rule, the village is angry with him, fearing that he is endangering their safety. Nami appears to see what’s going on, lugging her precious berries. If she can collect 100 million of them, the pirates have promised to sell her the village, and she is determined to make her goal, no matter how she has to do it.

Meanwhile, Zolo has been busy in Arlong Park. Hearing the trumpet blast, he gets a ride from an obliging octopus, as Luffy and the others are confronted by Momoo, the giant sea cow.

Returning to the Park, with Usopp in tow, Sawtooth is dismayed at what he finds. Especially when he learns how the perpetrator has been able to escape his vengeance. Usopp is in quite a quandary, and begs for his life. In order to prove that she is trustworthy and one of them,  and to allay their suspicions that she aided Zolo, Nami has no choice—she has to kill Usopp.

After Luffy and Sanji land on the island, a wild-eyed Johnny tells them of Usopp’s demise. Meanwhile, a navy ship has appeared off the shore of Arlong Park. Has it come to aid the villagers against the pirates? When Nami confronts Luffy and the others, they don’t want to believe her perfidy, despite Johnny’s eye-witness account of her murder of Usopp, especially the smitten Sanji. She tells them they need to go, this is none of their business and they aren’t wanted here, but Luffy decides he needs a nap and lies down in the middle of the road to take one.

As they wait to see what’s going down with the navy ship, Nojiki tells them Nami’s story, and why she’s doing what she is.

This volume of One Piece has a lot going on, filled with non-stop action as the pace of the plot definitely picks up. Not that it was slow before, but now it’s rushing headlong toward a denouement. I love the intricacies of the characters and how their plots wind about one another and intertwine. I did Eiichiro Oda does a marvelous job of twisting everything about, meshing it all together.

I also love how he doesn’t make Luffy the main character in everything, although he is the main character. He treats it more as an ensemble piece, and in this volume, we see a bit more of Usopp, and a whole lot more about Nami, finding out what makes her tick and what her motivations are.

We go back to when Nami and Nojiki were foster sisters being raised by a single mother, Belle Mere, and of what happened to them, and to the village, when the pirates descended on them years before. This goes a long way to understanding Nami, and I really enjoyed it, as I hadn’t thought much of her before on the basis of her previous actions, which have been sometimes despicable. But now everything makes perfect sense, and I have compassion for her.

As for Usopp, he may be a bit of a fool, but his heart is in the right place, even if sometimes he’s a coward, but he means well, and I like him pretty much. This is a series that can be enjoyed by people of all ages, even though it’s labeled teens. A good story is a good story, and this is definitely one of those. I enjoy the artwork, I think it fits well with the writing, and I’m enjoying this series. I heartily endorse it.
Posted by Julie Lynn Hayes at 8:17 AM