Things happen for a reason

Today I ended my first temp job. I was there for over two months, from June 19th, until today. Now, I could be angry and/or upset, curse Fate and wail and moan about what will happen us now?

But I would rather not, because face it, that's counter productive. I have a philosophy - everything happens for a reason. So looking back at my time at Iron Mountain, what did I gain and/or learn? First, I made money, enough to get back on track with my bills, and have a little fun now and then too. But more importantly, I made some friends. We were a great team, the supervisor told us so - she was sorry to see us go. It's possible some of us can come back to the data center and work (I couldn't do that one, it involved climbing up and down ladders all the time, and it was too physical), and there might be openings in Imaging, which I opted for, although the pay is $1.50 less an hour. But that's still more than zero.  Also, working at Iron Mountain toughened me. The files were heavy and at first I thought I'd die unloading the carts, shelf by shelf, in order to key them. Plus we had to push these wooden carts filled with files back and forth from the data center. But I did it, and I think I got muscles out of it and stamina.

So all in all, it was a positive experience, we all exchanged information and promised to keep in touch. I'm glad I worked there. Maybe I'll end up back there again some day, but for now it's time to move on.

When things happen you didn't plan on, it's easy to get upset and blame everything from bad luck to bad karma to every person you know. But rather than do that, look at what you've gained, and decide where  you want to be, and what your next move will be. It's not always easy to see, but you won't see it if you aren't looking for it.

I would rather be optimistic than depressed and yes, I think you can control that, if you try. I'm not saying I never get down, or upset, or mad, or any of those basic human emotions. But on the whole, I have to say I'm a happy person.

So, I'll leave you with the lyrics of a song that sums it up rather well. 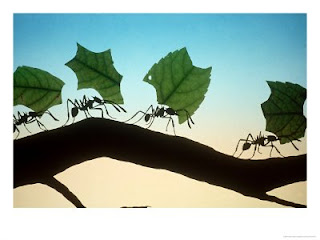 Next time you're found, with your chin on the ground   There's a lot to be learned, so look aroundJust what makes that little old antThink he'll move that rubber tree plantAnyone knows an ant can'tMove a rubber tree plantBut he's got high hopes, he's got high hopesHe's got hot apple pie in the sky hopesSo any time your gettin' low'Stead of lettin' goJust remember that antOops there goes another rubber tree plantWhen troubles call, and your back's to the wallThere's a lot to be learned, that wall could fallOnce there was a silly old ramThought he'd punch a hole in a damNo one could make that ram scramHe kept buttin' that dam'Cause he had high hopes, he had high hopesHe had hot apple pie in the sky hopesSo any time your feelin' bad'Stead of feelin sadJust remember that ramOops there goes a billion kilowatt damAll problems are just a toy balloonThey'll be bursted soonThey're just bound to go popOops there goes another problem kerplop

You might remember that from Laverne and Shirley. I sure do.

So for now, I'll be around!  Until next time, take care!

Email ThisBlogThis!Share to TwitterShare to FacebookShare to Pinterest
Labels: everything happens for a reason. endings and beginnings, positive attitude