One Piece 7: The Crap-Geezer Review 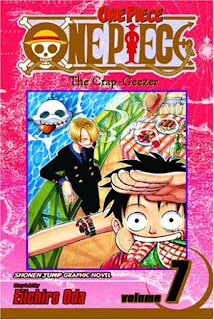 Sanji shows that he’s more than cook when he defends the Baratie with a tremendous kick, deflecting the fish-head, to the amazement of his crew! His action re-energizes the sea cooks, who vow to fight for their floating restaurant to the end against the scurvy knaves that comprise Don Krieg’s pirate crew. So of course Krieg has to throw them a curveball—in the form of his second unit commander, Invincible Pearl.

Pearl, as his name implies, is a huge fellow covered in shields with pearl centers, and wears a pearl on his head. As he leaps onto the Baratie, he takes down two of the cooks with his Pearl Surprise move. One of Krieg’s men attempts to take the knife from one of the dying men but Sanji puts a stop to that with a swift kick. “A chef’s knife is his soul,” he tells him. “A crap-bum like you had better not touch it.”

Pearl boasts to Sanji that he’s been invincible in 61 battles to the death; in fact, he’s never even been injured, and has never lost a single drop of blood in battle. Meanwhile, Luffey is clinging for his life to a mast—if he drops into the ocean, he’s a dead man; since eating the devil fruit, he can’t swim a stroke and would sink like a stone. Luckily, Krieg’s maneuver drops him onto the Baratie, right on top of Pearl, drawing blood, to the pirate’s surprise. When Krieg’s crew see the blood, they immediately try to calm Pearl down, fearful of the consequences. Because of experiences as a child, when Pearl feels threatened, he sets himself aflame. Under the circumstances, being on a ship, afloat at sea and all, this is not a good idea.

The sea cooks back down from the human wall of flame, but not Sanji. “Moron,” he says, “you can’t be a cook if you’re afraid of fire!”  Things are starting to look up when Sanji finds himself on the wrong end of a gun barrel, being pointed at him by Gin, the pirate whose life he saved when he was starving!

Gin offers Sanji the opportunity to get off the ship, but he refuses, even when Chef Zeff taunts him, calling him eggplant head.  Luffy tries to intervene, but to no avail. He certainly doesn’t understand Sanji’s attitude, and neither does anyone else. Especially when Pearl pounds him with some of his best moves. Still the stubborn chef refuses to go. But there is method to his madness, and he finally explains why he refuses to let the Baratie be taken away from the ornery one-legged Chef Zeff. It all began nine years before…

When Sanji is done with his tale, everyone understands the debt he owes Zeff, and why he won’t allow anything else to be taken from him. Still, Luffy thinks Sanji is being ridiculous, and he sees only one way out of the situation—he intends to sink the Baratie himself. He tells Sanji it’s not worth dying over, and what use is Zeff saving his life if he’s going to just throw it away?

Don Krieg steps in and he and Luffy get into a battle of words, Luffy adamantly proclaiming himself the best pirate there is. Finally it comes down to Gin and Sanji. Can Gin kill the very man that showed him incredible kindness? Well, he is a ruthless pirate, after all…

The battle over the Baratie continues as we meet yet another of Krieg’s crew in the form of Invincible Pearl. Despite his record, Pearl’s a blowhard and not very likeable, but he’s an interesting villain. The backstory involving Chef Zeff and Sanji explained a lot about the latter’s loyalty to the crap-geezer, as he calls him. Sanji is a very interesting character, one I suspect we’ll be seeing a lot more of in the future. In this volume, Luffey doesn’t play as big a part as usual, but when he does, he’s generally very brave, but often in the way, in misguided attempts to assist.

This is a fun series for all ages, and there’s lots more fun ahead. Sticking with it for the long haul!