Happy Saturday! Welcome to another edition of Saturday is Horror Day!

Return of the Living Dead II - 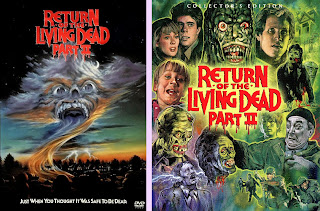 Jesse (Michael Kenworthy) is bullied by two other boys into joining their club. Billy (Thorn Van Lingen) forces him to go to their clubhouse, which turns out to be a crypt in the cemetery. There they find some old army cannisters, and Billy claims them. Jesse wants nothing to do with them and makes his escape, but the other boys aren't as luck as they accidentally break the seal and are overcome by an obnoxious gas.

Ed  (James Karen) and Joey (Thom Mathews) work together, their job being to rob graves for body parts which they sell. supposedly in the name of research. They come across Jesse, who is hiding in a crypt.  He eludes them and runs off, but quickly discovers that things are not what they should. Dead people are rising, and they're hungry. 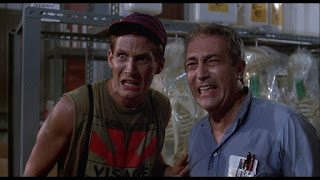 Jesse races home and wants to call the number he found on the cannister, because surely the army can 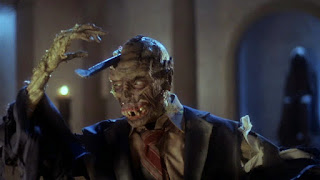 help them, but his sister Lucy (Marsha Dietlein), who is babysitting him, has other ideas. When a young, good-looking cable installer, Tom (Dana Ashbrook) shows up, she is really determined to keep her brother under control.

But the dead have other ideas... 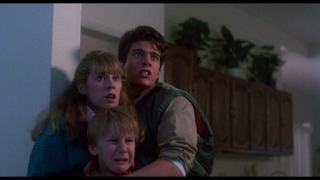 The sequel to The Return of the Living Dead  has some of the wit and charm of the first movie, but no Dan O'Bannion, alas. But the good news is that we have the return of James Karen and Thom Matthews, who did much to make the first film memorable. They're working together again but they're playing different characters, yet they're very similar to the first ones. If you've seen the first film, you'll remember this line: "Watch your tongue, boy, if you like this job!"

While still interesting and comedic, it lacks a bit of what made the first one so good. Even so, it's a good watch and well worth the effort. You might remember Dana Ashbrook, who will later go on to play in Twin Peaks as Bobby Briggs.  Also, keep an eye out for the Michael Jackson zombie toward sthe end. All in all, I give this a solid 3.75 Stars.