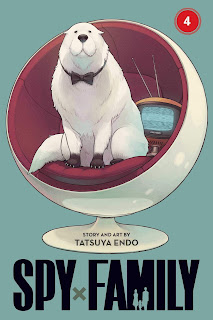 As a reward for earning her first Stella star, Anya requests the Forger family get a dog. Loid, wishing to keep her motivated to earn more stars and become an Imperial Scholar, acquiesces. He takes Anya and Yor to a pet shop which is associated with his agency and deals with military dogs, but none of them is to Anya’s liking. Loid receives an emergency summons and has to leave them to their own devices due to a threat against the Foreign Minister. He excuses himself by saying he needs to use the bathroom.

Yor and Anya wind up at the Adoption Fair being held at the Animal Shelter. It’s a huge place, filled with many kinds of pets, and Anya can’t make up her mind. But then a huge dog attracts her attention, even though he is standing on the street, looking in. Can she really be reading his mind? And what does she see there? An image of her family? She slips away from Yor so she can find the big doggy and see what’s going on, but ends up in a place filled with bad guys! The leader of this gang, Keith, wants to hurt Anya, even though the others protest she’s just a little kid, but it’s doggy to the rescue! In the meantime, Yor is going crazy, trying to find Anya and wishing Loid would hurry back from the pet shop’s bathroom!

Now it’s up to Loid… and Yor… and Anya to save the day!

Now that Anya has scored a dog, she thinks the path to friendship with Damian Desmond will be an easy one, but when she tells him about her new dog, he is less than impressed. However, when he seems a little interested and asks the dog’s name, she makes what he considers terrible suggestions. Oh dear, she can’t even name a dog properly? What use is she? When the Forgers take an outing in the park, something happens that reveals the perfect name for the new member of the family!

Most of this volume is certainly a comedy of errors, from start to finish, but every blunder works out right for this family. Each one shines in their own way, according to their secret ability, not knowing that the others are working on the same problem. The ongoing joke that Loid is spending an inordinate amount of time in the bathroom is hilarious (how else can he explain being absent without revealing himself as a spy?), with Yor going full-on protective mother mode in defense of Anya. Anya is determined to help Loid’s mission succeed so she won’t be sent back to the orphanage. And now we have the newest member of the team, Bond, who has his own secret ability. (Not a spoiler if you’ve seen the cover). Bond is so adorable, and his name is perfect.

There is a short mission at the end which involves Anya using her stuffed animals to play secret agency. But when she attempts to go into the one place in their apartment where she isn’t allowed, an explosion is imminent which could jeopardize Operation Strix! Oh no, how to placate the upset child?