Good morning everyone! Please welcome author D. Robert Hardy to Full Moon Dreaming! He's here to tell us about his new release, Raven's Apprentice. He will be awarding a $20 Amazon/BN GC to one randomly drawn commenter via Rafflecopter during the tour. The more you comment, the better your chances of winning. To find the other stops on his tour, go here. Don't forget to look for the Rafflecopter at the end of this post! Raven's Apprentice is a compelling true story from the west coast of B.C. that launches you into the world of Raven and our interconnectedness with all living things.

"Suddenly, without warning, they spun on a fin and started charging the boat. My thrill turned to real panic. Killer whales attacking a boat. Had there ever been such a thing? A paralysis gripped me. Now, within striking distance, they slipped into an arrowhead formation just below the surface. If the leader of the pack didn't bring the boat down, his flanks would."

"At about 20 feet off the bow, the frontrunner broke the surface, peeling waves off his rostrum as he continued his commitment to engage. Bracing for impact, my hands squeezed into the railing..."

Travel with me aboard MV Lady Guinevere. Witness being charged by transient killer whales, stalked by wolves and walking creeks so pristine you feel as if you were the first human to experience the wonder of nature.

"You have succeeded in bringing the reader on the voyage with you and into the deeper experience of transcendence and heightened awareness. Some of your experiences are literally skin tingling, many will leave your reader thinking and remembering for a long time to come." - Sid Tafler – Writer, Editorbr.

"Don Hardy’s RAVEN’S APPRENTICE is a great and compelling story, both nuanced and vivid, that will leave readers wanting to head off on adventures of their own."

As I lay there, content and contemplating the beauty of the bay, I felt that familiar feeling of dread and heaviness I experienced before an intense dream. I put my head down and …

… I could hear native ceremonial chanting. Cedar smoke filled the air. I slowly opened my eyes. It was dark and I was still on deck. I looked up to see the black sky filled with millions upon billions of tiny light holes. The ceremonial chanting drew my attention to the beach. And then I saw it.

On the edge of the forest, an aboriginal longhouse shimmered like a mirage. It must have been 150 feet long and 50 feet wide. The cracks in the walls were leaking light and shadowy figures danced inside. Smoke billowed from the flaws in the roof and beckoned me closer with its enchanting cedar and pine scent.

The whole spectre was a disconcerting sight from the bow of my boat. How could I have missed something that large? Was it always there and I didn’t notice it?

The chanting was hypnotic and charming. I slipped into the dinghy and slowly rowed ashore to explore the apparition. As I drifted closer, the chanting and drumming became louder and more defined. I scraped up on the sandy shore and slid to a halt. I stepped out without feeling the sandy bottom. The anchor was in my hand. I dropped it near the tidemark.

The word “nevermore” drifted into my thoughts. Just above me I saw movement on one of the splayed branches of a great cedar tree. It was Raven. He was sitting quietly alert. I carried on towards the longhouse. He watched me intently, turning his head with every step. I looked back and he dipped his beak as if to reassure me it would be OK. 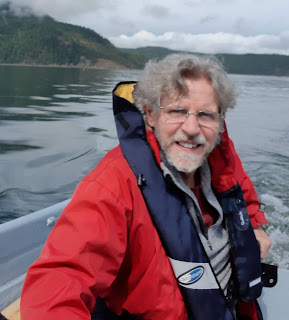 Born in Halifax Nova Scotia. Grew up in small-town Cumberland, BC. but could not wait to get out and make his mark. Toured throughout Canada and the US as a professional musician until he realized he hated touring. Settled in Victoria, BC. Wrote six unpublished screenplays until he had real success with a stageplay called "A Garland for Judy." It toured down the west coast from Bellingham to Los Angles but topped the bill in San Francisco for six months to sold-out shows. Eventually settling into technical writing and developing online courses for most of his working life. Raven's Apprentice is a memoir that captured the imagination of a retired CBC executive who said, "You must bottle up all of this adventure into a book! ...being rescued by transient killer whales encounters with wolves, spirits in the kelp ... it's all too exciting!" And so it is done.