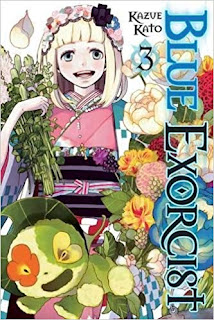 Rin is decidedly unhappy with the amount of work that’s required in the exorcist cram school, being inclined toward laziness. Yukio despairs of his brother being able to succeed, and tells Rin he relies on the flame of Satan too much. When Yukio is called to take care of some business, Rin insists on accompanying him… uninvited. It seems that Father Fujimoto’s familiar, Kuro, has become unmanageable since the priest’s death and needs to be taken care of. When Yukio agrees to take care of the cat, Rin protests and steps in to save the angry feline.

The exwires are sent on an assignment to Mephhyland, the academy’s amusement park, and Yukio pairs them up. Rin ends up with Shiemi, which isn’t exactly displeasing to him. She’s wearing a uniform today, one that brings certain features into prominence, drawing the attention of the guys in her class. Drawn by the sound of crying, Shiemi and Rin find a little boy ghost, who turns out to be more than they bargained for. To his dismay, Rin has his sword snatched by Amaimon, who reveals himself as Rin’s brother and works at forcing Rin to fight with him. And another mysterious figure emerges and is revealed.

Summer break means Forest Camp for the exwires, and on their first night of camp, they are given an assignment which only three of them can possibly complete. Who, if anyone, will emerge victorious?
Kazue Kato is beginning to fill in the blanks, and we get more of a glimpse into Rin’s extended family as well as life with Father Fujimoto. I love watching him with Shiemi, and I suspect she has feelings for him. As for Rin, he’s pretty clueless but I think he likes her too, whether he’s willing to admit it or not. The story is moving apace and is keeping my interest. I look forward to see how it develops, and watching the exwires become a cohesive team as they form stronger bonds among themselves. I have to wonder how long will it be before they learn who Rin really is, and will that make any difference in how they treat him?