Please welcome author Yoshiyuki Ly who is here to tell us about her new release, The Scorpion's Empress. The author will be awarding a $50 Amazon/BN GC to one randomly drawn commenter via Rafflecopter. The more you comment, the better your chances of winning. To see the other stops on her tour, go here. Don't forget to look for the Rafflecopter at the end of this post.

The Scorpion’s Empress
by Yoshiyuki Ly 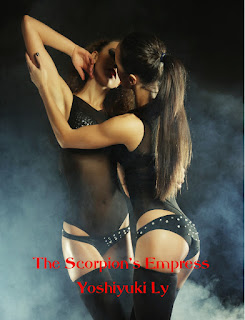 After years of serving a corrupt government, Ser Videl, an idealistic paladin, learns that her younger sister is tangled in a dark scheme against Raj Mangala, the compassionate yet troubled Empress of the city's oppressed lowtown; the two women meet and are deeply drawn to one another, finding a shared sanctuary in their violently-divided city. The Scorpion's Empress is intimately written through the eyes of both twenty-seven year old women.

Videl's loving devotion is just what Raj craves, but Raj is wary of letting her guard down while protecting her throne. Determined to prove her worth, Videl chases after Raj and works to unravel the mystery of the plots against the Empress. Raj wants Videl to serve her emotional and sexual needs, and the two explore a meaningful relationship of dominance and submission that delves fully into their deepest wants. When the conspiracy against Raj comes to a head, Videl's loyalties are tested when she is forced to choose between her past and her Empress.

I stood up and slowly walked to one of the torches along the wall. That fire festival where we'd had our first time together… I took the torch and went back to her. Videl stared at me—expectant, anxious. I moved the fire closer to her face. She steeled her eyes and waited. She didn't protest. She didn't shirk away from me.

“Ain't you scared?” I wondered. Videl shook her head. “It's fire for fuck's sake! Any normal person would've told me to cut it out by now.”

“You wouldn't burn me with it. I know you like my face too much to do that.”

I laughed and said, “Oh, so it's all logic with you? Your imagination must be full of rocks.”

“This might have played out differently if I were in subspace,” she pointed out. “But, right now, I'm not bothered by it. I can reason myself out of most situations. It's hard to suspend my disbelief. I trust you to be logical, too. If you burned me, you wouldn't get to show me off to Nyte later on.”

“Show you off, huh?” I asked, putting the torch back. “You think that's what I wanna do?”

“I have a feeling you'll want to when the time comes.”

“We'll see about that. For now I wanna see more about suspendin' your disbelief.”

Videl was about to ask me what I meant—until I picked her up and threw her down onto the polished wood of the table. I straddled her, watching her pulse pick up along her neck. She bit down on her lip to keep from making a sound.

INTERVIEW
What are four things you can’t live without?
My laptop, my TV, my PlayStation 4 and the internet.
What is your favorite television show?
Damages.
If you could be any character, from any literary work, who would you choose to be? Why?
Penleigh from Consider What Becomes of the Ashes by Pixelnyx. He grows and sacrifices everything for Noah throughout the story. I admire that.
What have you got coming soon for us to look out for?
Not soon, but I am working on a spiritual successor to The Scorpion’s Empress. It features new characters and it’s set over 250 years after this book. We get to find out the consequences of Raj and Videl’s actions.
What books or authors have most influenced your own writing?
Pixelnyx’s work—both fanfiction and original.

Yoshiyuki Ly was born in San Diego, CA. She lived there until moving away to college. In high school, she began writing fanfiction as a serious hobby. Her pen name is representative of her multiracial heritage and a unique, diverse outlook that is reflective in her work. While pursuing an undergraduate degree in philosophy, she spent her free time reading the works of Virginia Woolf, Soren Kierkegaard and Simone de Beauvoir. She then spent the next years honing her craft to become a published author.